Pseudoceros maximus is a species belonging to the Platyhelmintes phylum, and within to the Poycladida order and the Pseudocerotidae family. It is a species present in the waters of the eastern Atlantic Ocean and throughout the Mediterranean Sea, where frequently stays over rocky substrates and very often found on top of sponges and / or bryozoans. We can find specimens of this species up to 60 meters deep, although up to 15 meters is the depth at which there is a greater abundance of specimens.

The body of Pseudoceros maximus is about 4-5 cm long, although there are records of specimens up to 8 cm. Its body is very flattened dorsoventrally, is oval in shape and has small undulations on the edges. In the anterior part of the body we find two tentacles formed by two folds of the body edge. These tentacles have powerful chemoreceptors that allow the specimen to detect prey at considerable distances given its size. While at the base of these tentacles we find ocelli that allow them to detect light, we will also find ocelli on the margin of the entire body. On the smooth dorsal surface, we find longitudinally in the middle a bulge of the body that adopts a much darker color than the rest of the body which is brown. It has multiple white spots on the back that are irregularly scattered, and the edge of the body is often lighter. The ventral surface of the specimen is usually much lighter, generally whitish, although we can rarely observe it.

It is important to highlight the extraordinary capacity of regeneration, that is, to split in half and originate two individuals exactly the same as the original one. Always bearing in mind that if they suffer a split at either end, the larger portion will be able to recover the lost part, but the smaller portion will not have enough regenerative power to give rise to a new individual.

Pseudoceros maximus is a hermaphrodite species with cross-fertilization. Each individual fertilizes the eggs with sperm transferred and stored from the other specimen. 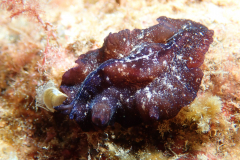 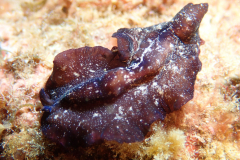 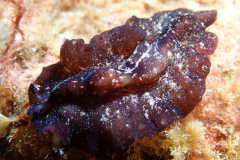 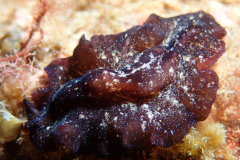