Thysanozoon brocchii is a species of the Platyhelmintes phylum classified in the Polycladida order and within the Pseudocerotidae family. It is a species found in the waters of the Mediterranean Sea as well as in the eastern Atlantic Ocean on rocky substrates up to 80 meters deep, and frequently over bryozoans and sponges on which they feed.

The body of Thysanozoon brocchii is dorsoventrally flattened, somewhat thick, and adopts an oval shape up to 5 cm in maximum length. The dorsal surface of the body is filled with rounded papillae, and in the most anterior part of the body we find two tentacles formed by folds of the body margin. At the base of the tentacles, we find the ocelli. As for coloration, the specimens are reddish brown, although it is possible to find specimens with yellowish tones. On their dorsal surface there are two lighter colored stripes that form a cross.

They are carnivorous and feed on sponges, bryozoans, tunicates and small crustaceans, among others. They usually detect food at a certain distance thanks to chemoreceptors present in their tentacles. Thysanozoon brocchii specimens are capable of projecting their pharynx to the outside, and sucking their food with it. Everything that they cannot digest will be returned to the outside through the same mouth, due to the lack of anus.

As is common with planarians, Thysanozoon brocchii is a hermaphroditic species although it requires cross-fertilization by which both specimens inject each other with sperm that is stored until later used to fertilize the eggs. When this occurs, the specimens form a sheath that they attach to rocks or algae. When the eggs hatch, the larvae are released, which are planktonic and will be dispersed by the currents, and soon after descend to the substrate and take the form of the adult animal.

It is important to highlight the great capacity of regeneration, that is, to split in half and originate two individuals exactly the same as the original one. Always bearing in mind that if they suffer a split at either end, the larger portion will be able to recover the lost part, but the smaller portion will not have sufficient regenerative power to give rise to a new individual. 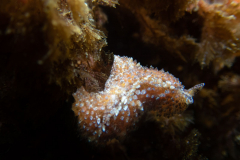