The sponge Agelas oroides belongs to the class Demospongiae, order Agelasida, family Agelasidae. It is a species found only in the waters of the Mediterranean Sea, in places with little light and on rocky bottoms up to 50 meters deep.

Agelas oroides is a colonial species, in which in a colony there are several individuals. Its surface is irregular, somewhat elastic to the touch, but with a leathery consistency. The colony forms an irregular mass in which the different individuals stand out forming protuberances in whose apical ends we will find a large osculum of approximately 1 cm in diameter. Usually globular colonies do not exceed 20 cm in height. The most common color of Agelas oroides is deep orange, although there are some individuals that have more yellowish tones.

The food of Agelas oroides is obtained by filtering the water column that surrounds them. Through a multitude of small pores throughout its body, it inhales the surrounding water, and by means of specialized flagellated cells, creates the necessary current to generate the water current through its body, and thus trap small organic particles or phytoplankton/zooplankton from which it obtains the energy and compounds necessary to grow. All the water that has been filtered by the individual will be expelled through the upper osculum.

Agelas oroides can reproduce both sexually and asexually. Asexual reproduction can occur by budding of an individual in the colony, or by fragmentation. Those fragments of the individual that have been produced by the forces of marine storms have the ability to regenerate a complete individual. As for sexual reproduction, male and female gametes are released into the water, where fertilization occurs and the larva is formed. This will go through a planktonic ciliate larva phase which after some time will settle to the substrate to give rise to an individual. 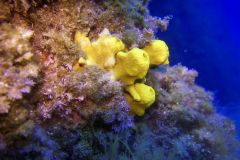