The sponge Sarcotragus fasciculatus belongs to the class Demospongiae, order Dictyoceratida and family Irciniidae. It inhabits the coasts of the eastern Atlantic Ocean and the entire Mediterranean Sea, from shallow waters to 40 meters deep. It prefers hard bottoms in illuminated areas, although not in direct light.

It is an encrusting species of considerable dimensions (7-20 cm in height), if we consider the size of the sponge species of the Mediterranean Sea. Its body has numerous elevations or towers more or less conical in shape, and lighter in color than the rest of the body, which are crowned by an oscular opening. These towers that form on its body are the reason why this species has been given the colloquial name: cathedral sponge. Its body has a hard leathery consistency, and its color varies among specimens, from yellowish, chestnut brown, brownish or purplish.

They are filter feeders. Sarcotragus fasciculatus absorbs water through a multitude of microscopic pores located all over the surface of its body and conducts it through inner channels where food particles are collected. Once this is done, the water is expelled through a large orifice called osculum, which is located at the apex of the turrets. It feeds mainly on suspended organic matter and microorganisms from the plankton.

Sarcotragus fasciculatus can reproduce sexually or asexually. Asexual reproduction, as is common in many sponges, occurs either by budding or fragmentation, and the protrusions or fragments generated are capable of developing into a complete individual. Sexual reproduction involves the release of spermatozoa into the water, which upon entering the cavity of another individual, fertilize the eggs present in the latter, and after a short time the larva is released into the currents. After a time in which the larva drifts, it will settle on the rocky bottom and generate a new colony.

There is a possibility of confusing Sarcotragus fasciculatus, with the sponges Ircina oros and Ircina spinosula. From the first one, Ircina oros, to differentiate them it will be enough to observe the environment in which we observe them. Ircina oros will never be found in illuminated places. The other species, Ircina spinosula, the differentiation with Sarcotragus fasciculatus is much more complicated, and will require the study of their spicules by microscopy. 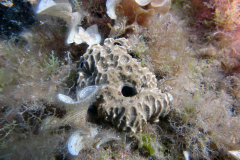 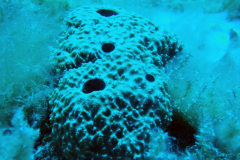 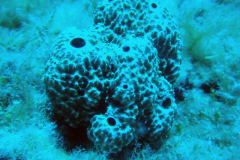