Pomacanthus xanthometopon is one of the 13 members of the genus Pomacanthus, which together with 7 additional genera make up the family of angelfishes (Pomacanthidae) in which a total of 89 species are currently described. This species is found in lagoons, canals and outer reefs, where it frequents those areas of caves and ledges in waters up to 30 meters deep. Its geographic range includes the Indian and Pacific Oceans, in Malaysia, Indonesia, Japan, Taiwan, the Philippines, Australia, Micronesia and the Maldives. In the latter, the species is very common.

As an adult it has a colorful livery: the base coloration of the body is blue to black, and the scales are bordered with yellow, producing a lacy effect. The head is blue, with a yellow horizontal stripe covering the eyes, like a mask. The snout and cheekbones are crossed by irregular blue lines intermingled, producing a crochet-like effect. The caudal fin is yellow, as well as the posterior ends of the dorsal and anal fins, and the pectoral fins. They have a black ocellus at the end of the dorsal fin. Young specimens have black coloration, with narrow vertical white and blue stripes, which are curved at the ends. The fins are edged with blue.

The diet of Pomacanthus xanthometopon is omnivorous in nature, finding among its preferred prey encrusting specimens of sponges, tunicates, which it occasionally complements with some species of algae. 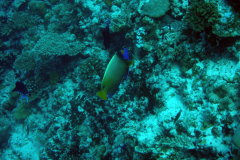 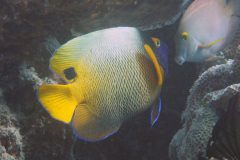 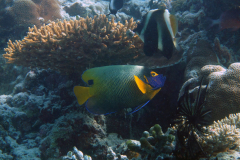 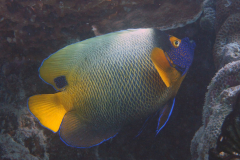 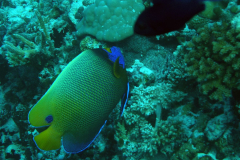 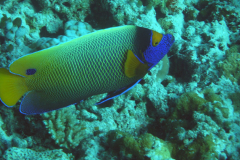