Within the family Pomacentridae or also known as the family of damselfishes & clownfishes we find 4 subfamilies grouped together, encompassing a total of 29 different genera and 387 species at present. One of them is Abudefduf saxatilis, a damselfish that generally inhabits shallow waters (less than 15 meters, although occasionally up to 40 meters) in the tropical and subtropical regions of the Atlantic Ocean, on the eastern coast from the Canary Islands and Cape Verde, to Angola; and on the west coast of the Atlantic, from North Carolina to southern Brazil.

As for the color pattern of the body of Abudefduf saxatilis, the predominant color is bluish white with yellowish upper dorsal part. They present on the flanks and dorsal region 5 black vertical stripes that narrow towards the belly. The interspaces of these stripes are wider than the stripe itself. There is a sixth stripe of very weak color that is located in the area of the caudal peduncle, although not in all specimens can be observed.

Generally, Abudefduf saxatilis lives in groups of hundreds of specimens on rocky and/or coralline areas. Its diet is based on plankton, benthic invertebrates and occasionally some algae.

During the reproductive season of Abudefduf saxatilis, and after the eggs are laid, the male specimens increase the blue tone of their body. The reproduction of this species is oviparous, being the males in charge of creating a nest in which the females will deposit the eggs that the male will fertilize. The clutches are incredibly numerous and the male will take care of them. 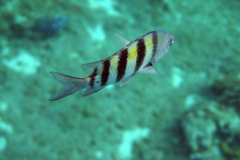 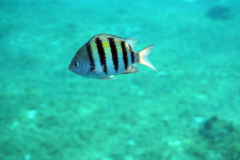 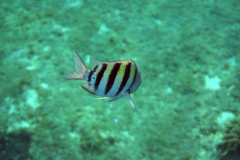