Within the Pomacentridae family or also known as the family of damselfishes & clownfishes we find 4 subfamilies grouped together, encompassing a total of 29 different genera and 387 species at present. One of them is Amphiprion frenatus a species of clownfish that inhabits the lagoons and meadows of coral reefs, at depths of up to 12 meters. The geographical distribution of the species is extensive, being present in the Indian and Pacific Oceans, from the Gulf of Thailand to Palau, and from southern Japan to the island of Java. They are also present in Australia, China, Indonesia, Malaysia, Micronesia, Philippines, Singapore, Taiwan and Vietnam.

The body color of Amphiprion frenatus is orange to tomato reddish brown, with the color intensifying as we move towards the back of the body. It stands out in its body a vertical white stripe with black edges, at the height just behind the eyes, and that runs from the dorsal part passing through the operculum and almost completing the circumference in the ventral part, although usually the stripes of both flanks do not join each other. It is common in the species, that the most adult specimens have intensified their body coloration so much that they become practically black. Some specimens may have a second white stripe with black borders after the first one, although this is not a very frequent trait.

Amphiprion frenatus establishes a mutualistic association with specimens of anemones (mostly Entacmaea quadricolor and Heteractis crispa), in which an adult pair and several juveniles coexist in the same anemone.

The diet of Amphiprion frenatus is omnivorous, and is based on the capture of zooplankton as well as small benthic invertebrates and occasionally some algae.

The reproduction of this clownfish, as with most other species of the genus Amphiprion, has some features that may be curious to say the least. It is a protandric hermaphrodite species, that is to say that all specimens are initially males, and in the absence of the female in a colony, the most dominant male undergoes a transformation process to become the dominant female of the colony. These colonies that are formed between the different specimens that coexist in the anemone are stable colonies, meaning that the couple formed between the male and dominant females is monogamous. During the breeding season, the male will perform a ritual of attraction towards the female, in which he completely unfolds his fins. This behavior will be intertwined with swimming movements up and down to attract her attention, as well as cleaning a rocky area adjacent to the anemone. In each of the clutches, a little less than a thousand eggs are laid, which the male will delicately care for by renewing the water with delicate movements of his fins. After about a week, they will hatch. The life expectancy of the species is between 6 and 10 years. 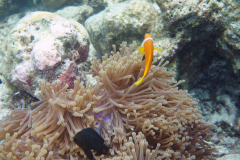 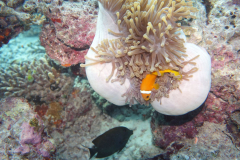