Within the emperor breams family (Lethrinidae) we find this species, Lethrinus erythracanthus. It is a fish that lives in deep lagoons, as well as in the channels and slopes of the outer coral reefs at depths between 20 and 120 meters. Its geographic distribution covers the Indian Ocean and the central Pacific, from East Africa, the Seychelles, Chagos and Maldives, to Thailand, the Philippines, Micronesia, and from northeastern Australia to the Samoan Islands, Society Islands and French Polynesia.

Lethrinus erythracanthus is the largest of the 27 species in the genus Lethrinus. It has a tall, elongated body, which can reach up to 70 cm in total length, although the most common is to observe specimens of 50 cm. The dorsal profile of this species is convex in the region near the eyes, and has a relatively short snout with a large mouth with fleshy lips. The dorsal fin is unique, and is formed by 10 spines followed by 9 soft rays. The fourth or fifth spine is the longest of all the spines of the dorsal fin. The anal fin, on the other hand, is formed by 3 spines and 8 soft rays, with the third to fifth rays being the longest of the fin. The pectoral fins are made up of 13 rays.

It is a species whose adult specimens are usually solitary, non-migratory, and whose diet is based predominantly on echinoids, molluscs, crinoids, echinoderms and crustaceans, which it catches in the seabed where it lives. 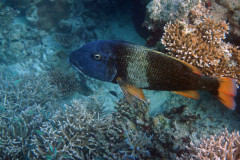 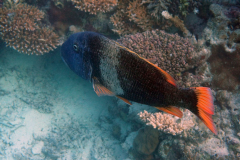 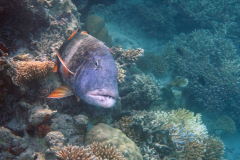 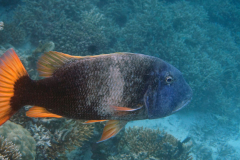 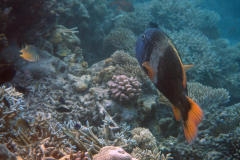