Diagramma pictum belongs to the family of grunts (Haemulidae), a family of fishes consisting of 2 subfamilies in which there are 19 different genera grouping 133 different species. This species is found in coastal waters near coral reefs and lagoons in the Indian and Pacific Oceans, from Indonesia to southern Japan and Fiji, but is not present in northern Australia and southern New Guinea. The bathymetric range of this species is between the surface and 80 meters depth.

Diagramma pictum is a fish with a laterally compressed and considerably long body, being common to observe specimens of 45 cm, although the maximum total length recorded for the species is 100 cm. It has fleshy lips that become more and more prominent with age. In its chin we will find in its lower part 6 sensory pores between which there is no presence of any kind of indentation that connects them to each other. The dorsal fin of this species has between 10 and 11 spines, which are followed by a region of 20-25 soft rays.

The coloration of Diagramma pictum changes with age. Juvenile specimens have the upper part of the flanks dark brown or black, in which 3 or more wide longitudinal stripes are formed, between which we observe some interspaces somewhat narrower than the stripe itself and of a pearl blue color. On the underside of the flanks, the color is yellowish silver. The dorsal and caudal fins are yellow with black spots and dashed stripes. All these dark stripes that we observe on the body and fins of juveniles will increase with age, until they become small round spots that fade along the length of the body or at the ends of the caudal fin. Adult specimens are bluish-gray, with numerous small circular spots of bright yellow to golden-orange color. Sometimes these spots join together in the head region to form stripes. The inside of the mouth of this species is bright orange to red. We will also find that the dorsal fin is bordered by a black colored line, while the anal and pelvic fins have black tips.

The diet of Diagramma pictum is based on invertebrates and small fish. 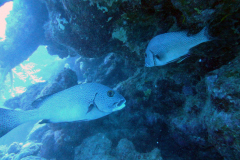