Carangoides ferdau is a fish belonging to the order Peciformes and to the family Carangidae. It is a pelagic species that has a preference for coastal waters near sandy beaches or in waters close to reefs, and that we will find up to depths of up to 60 meters. Its geographical distribution is very wide in the Indian and Pacific oceans, being present from Japan to Australia and even in Hawaii.

Carangoides ferdau is a very fast swimmer, often forming small schools of individuals. The diet of this species consists of small fish such as verdels, as well as crustaceans and molluscs. The reproductive period of the species is not known with certainty, but it is estimated to occur during the month of December, based on an increase in the observation of larval stages observed in February. 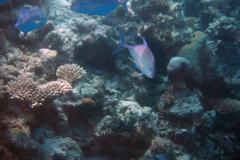