Hipposcarus harid is one of the 2 members of the genus Hipposcarus, which together with 9 additional genera make up the parrotfishes family (Scaridae) in which a total of 99 species are currently described. This species is found in the western part of the Indian Ocean, from the Red Sea to the Mozambique Channel, including Madagascar, the Seychelles, Sri Lanka, the Maldives archipelago and the Chagos Islands. It is a species that inhabits coastal waters associated with reefs and flats.

The body of Hipposcarus harid is elongated, oval-shaped and flattened laterally. The rostrum occupies a considerable part of the total body size, and ends with a short and rounded snout, under which we find the mouth. The dorsal profile of the rostrum is slightly concave. They can reach maximum total lengths of up to 75 cm. The caudal fin with a lunate shape stands out from its body.

Hipposcarus harid forms harems composed of one terminal stage individual, or male, and numerous early stage individuals, or females. In the initial phase, this parrotfish is brownish-yellow on the back with a whitish underside. It has large scales with lighter colored edges. In the terminal phase, its green base becomes blue on the belly. The scales change color at their margins to become pink. A long pink line runs from the beak to the middle of the body, passing through the axis of the pectoral fin. The tail lobes taper into long filaments. Both males and females have orange-yellow eyes.

These fish form, as previously mentioned, harems composed of one male and numerous females. Hipposcarus harid live in coral reef areas rich in benthic algae where they form large schools to forage for food. It is a protogynous hermaphrodite species in which there are two distinct phases, an initial one that includes females and primaries, that is to say males that were born male, and a terminal phase in which females transform into secondary males. It is an oviparous species in which the male and female form mating pairs. 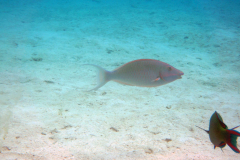