Epinephelus leucogrammicus is a species belonging to the genus Epinephelus, which together with 75 additional genera make up the Serranidae family, in which a total of 538 species are currently described. This species is widely distributed in the tropical Indian and Pacific Oceans. Its range extends from the east coast of Africa and the Red Sea to southern Japan and Australia. It is found on coral reefs and outer reef slopes and in lagoons at depths of up to 50 meters.

Epinephelus leucogrammicus is an elongated fish, slightly oval in shape, in which the rostrum occupies a considerable part of the up to 65 cm maximum total length it can reach. In terminal position inside the rostrum we find a large extensible mouth inside which we will not find palatine teeth, a distinguishing feature although not very useful during the visualization of this species with respect to other members of the same family. The dorsal profile of the rostrum is practically straight. The preopercula are rounded and have slightly serrated edges. The dorsal fin has 11 spines with slightly indented rays, followed by 14-16 soft rays. The anal fin has 3 spines and 8-9 soft rays. The pectoral fins are short and symmetrical, with 15-17 rays. Finally, the caudal fin is rounded and has 8 branched rays in the upper part and 7 in the lower part.

Adult specimens of Epinephelus leucogrammicus are greenish gray to brownish gray with numerous orange-red spots on the head (increasingly smaller in the anterior part), body, dorsal fin and at the base of the caudal fin. It has 4 whitish longitudinal bands or series of stripes often visible on the postorbital region of the head and body. The membranes of the dorsal, anal and caudal fins are clear. In contrast, juveniles of Epinephelus leucogrammicus have pale blue-gray longitudinal stripes on a golden background, as well as a black spot with blue edges (or a double spot) at the base of the caudal fin and another at the base of the soft dorsal fin.

The diet of Epinephelus leucogrammicus is carnivorous in nature, feeding mainly on other fish as well as invertebrates. Juvenile specimens are mimics of the red-lined fish, Halichoeres biocellatus, and the slimefish, Halichoeres purpurescens. Juveniles resemble them in their appearance and behavior, which induces a false sense of security in potential prey and allows the grouper to approach it undetected. 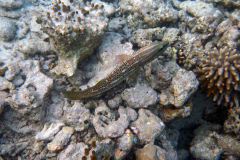 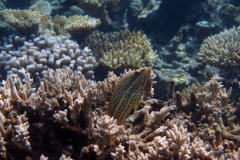