Naso vlamingii is one of the 20 members belonging to the genus Naso, which together with 5 additional genera make up the family of surgeonfishes (Acanthuridae) in which a total of 73 species are currently described. The geographical range of distribution of this species is between the tropical and subtropical waters of the Indian and Pacific Oceans, and can be found from the coasts of East Africa, to French Polynesia, Hawaii, Galapagos, and from southern Japan to the Great Barrier Reef of Australia and New Caledonia. It inhabits the crystal clear waters of coral reefs up to 50 meters deep.

The body of Naso vlamingii is oval, elongated and laterally compressed, with a maximum length of 60 cm, although the most commonly observed specimens will be about 40 cm in total length. The snout of this species is short, and in adult specimens there is a protuberance or hump just in front of the eyes. The mouth is small, slightly extensible and has numerous small cone-shaped teeth. The dorsal fin is unique and continuous, consisting of 6 spines and 26-27 soft rays. The dorsal fin is remarkable for its large size, especially in the rear part of the dorsal fin. The anal fin has 2 spines and 27-29 soft rays, while the pectoral fins have 17-19 rays and the pelvic fins have 1 spine and 3 soft rays. On the caudal peduncle we find on each side two pairs of cutting keels located on bony plates. Finally, the caudal fin is slightly rounded, with the presence of long filaments at the ends of the fin in adult male specimens.

The dark yellow-brown color is predominant on its body, with the presence of thin irregular blue bars oriented vertically along its flanks, as well as small blue dots above and below these bars, as well as on the head region. Also striking is a thick, bright blue stripe running from the eyes and projecting in front of the eyes into the bulge of the face. The lips are also blue, as are the outer margins of the dorsal and anal fins. The base of the caudal fin is blue, the center of the fin is brownish, and the outermost edge is yellowish, with blue filaments.

Despite being an omnivorous species, Naso vlamingii feeds on benthic algae (especially of the genera Cladophora, Dictyota, Jania, Laurencia, Padina and Turbinaria), as well as small planktonic invertebrates. 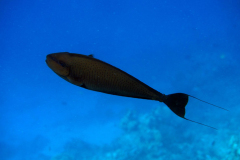 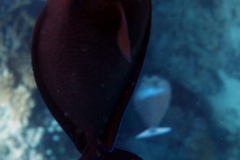 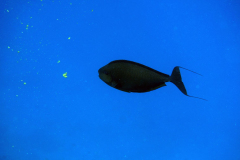 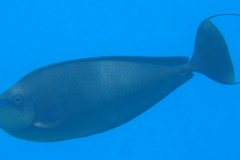 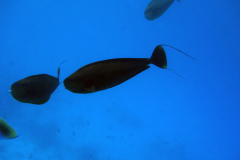