Trachinus radiatus is a species classified in the class Actinopterygii, order perciformes and family Trachinidae. It inhabits the sandy/muddy bottoms of continental waters, from the coastline up to 150 meters deep. We can find this species in the eastern Atlantic Ocean, from the coasts of Portugal to Angola, and throughout the Mediterranean Sea.

The body of Trachinus radiatus is elongated and compressed along its entire length. They can reach up to 45 cm in length, although it is usual to observe specimens of at most 25 cm. Their snout is short, with relatively small eyes and a large mouth located obliquely on the body. Its jaws are large, reaching the height of the posterior vertical of the eye. These jaws are equipped with villiform teeth that are grouped in bands on both jaws. Just behind the eyes, on the top of the head there are five groups of radial bony ridges that are very pronounced. The operculum is equipped with a powerful venomous spine. As for the fins of this species, it has two dorsal fins. The first dorsal fin is short and consists of 6-7 spines. The second dorsal fin is much longer and has 24-29 soft rays. The anal fin is formed by 2 spines and 25-29 soft rays, being its length similar to that of the second dorsal fin. The base body color is whitish with numerous brown spots and patterns formed by dense, irregular and oblique lines present throughout the body. The first dorsal fin is mostly black, and both the second dorsal fin and the anal fin have numerous grayish spots.

As expected from their anatomical characteristics, Trachinus radiatus live buried in the sand, leaving only their heads uncovered. This is why they can pose a danger especially for bathers, since this species does not flee in the presence of bathers, but rather bristles its spines, and if the bather steps on the specimen, the membrane covering the spines tears on contact, releasing the toxins. The sting causes intense pain and inflammation, which spreads to adjacent tissues. The inflammation can last for several days.

Trachinus radiatus migrate to deeper waters during the winter months, while in the summer months they are found in shallower waters. The diet of this species is varied, and we find among its prey small fish and invertebrates. 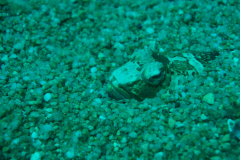 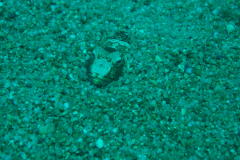 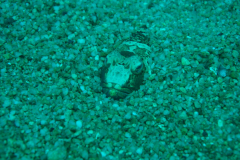