In the family of wrasses (Labridae) we find the species Symphodus ocellatus. It is a fish that inhabits the waters of the Mediterranean Sea up to 40 meters deep, on seagrass beds or Posidonia oceanica meadows, and often close to rocky bottoms.

Symphodus ocellatus is a not very large fish, females reach a maximum length of 9 cm, and males up to 12 cm. Its body is oval and elongated with a large head and a relatively short and sharp rostrum. The profile of the head is slightly convex, and there is a small, slightly protractile terminal mouth. The jaws have a single row of teeth. As for the coloration of the species, the base color of the body is greenish-brownish with a lighter belly. They are characterized by a black spot on the base of the tail, as well as light longitudinal bands on the body. The males of Symphodus ocellatus have an iridescent blue eyespot or ocellus with a blue and red border, which is located above the operculum, as well as a bluish pattern formed by lines on the head. Females and juvenile males are green or pale brown, with a dark longitudinal band bordered above by a white band, and the opercular spot is brownish or coppery and not bordered with blue. In both cases, the fins of specimens of this species are edged in blue.

It is common to observe specimens of Symphodus ocellatus removing parasites from other larger fish species. Its diet is based mainly on bryozoans, hydrozoans, annelids, crustaceans and molluscs, occasionally supplemented with those invertebrates and parasites in general, which it finds in the fish it cleans.

During the breeding season of Symphodus ocellatus, male specimens will build nests up to 20 cm in diameter that they will cover with algae. Males are able to build several nests a few meters apart, and will try to conquer as many females as possible. The females will enter the nests and lay their eggs, which are sticky and remain attached to the fragments of algae that make up the nest. For his part, the male will fertilize the eggs and will be in charge of meticulously defending and caring for the clutch. He will not hesitate to defend the clutch against possible intruders, for which he will deploy his operculum and fins to the maximum to appear larger and more aggressive than he really is. 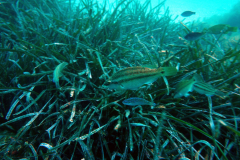