Within the order Syngnathiformes and at the same time in the family Aulostomidae, we find this species Aulostomus maculatus which is also known as the atlantic trumpetfish. It is a very common species in coral reefs, generally in shallow and transparent waters. Its distribution ranges from the coasts of Florida and Bermuda, to the south of Brazil.

Like all members of this family, Aulostomus maculatus has an elongated and slightly compressed body, about 50 cm long, although there are records of species up to 75 cm. They have a mouth located at the end of an elongated tubular snout, which is slightly inclined upwards. In the lower jaw highlights a unique chin. The dorsal fin is divided into two regions, a first one formed by between 8 and 13 spines isolated from each other and rarely in a vertical position. The second region of the dorsal fin, has between 21 and 25 rays and is located at the same height as the anal fin. The pelvic fins are small in size, and the abdominal fins have 6 soft rays. Throughout his body we can see a full lateral line, which begins near the area of the operculum and ends at the base of the tail fin. In general, individuals of Aulostomus maculatus have a reddish-brown color with irregular black spots and brown circles. Along the head and the flanks of the body we will also observe silver stripes. In the dorsal and anal fins, at the base of the previous rays have a strip (which sometimes takes the form of a point) black. The caudal fin also has between 1 and 2 black circles.

Aulostomus maculatus frequently adopts a posture in which it directs its entire body vertically, with its head facing the bottom. They do this to go unnoticed in the vertical environment in which they live. Their diet consists mainly of crustaceans. 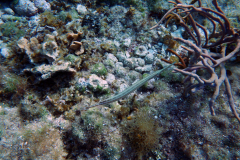 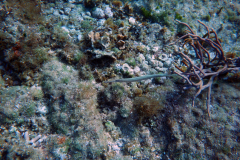