Aluterus scriptus, also known as Scrawled filefish or Scribbled leatherjacket, is a striking fish belonging to the order of Tetraodontiformes and the family Monacanthidae. Its common name of Scrawled filefish is due to the texture that adopts the skin, being extremely rough. It inhabits the shallow waters (less than 20 meters) of the external slopes of the coral reefs and sometimes in the reef lagoons. Its distribution is very wide, covering all seas and tropical oceans.

The body of Aluterus scriptus takes the form of a rugby ball, strongly compressed in the lateral direction, with maximum reported sizes of 80 cm, although generally the largest specimens we will see will not exceed 70 cm. Its face is moderately elongated, with a small terminal mouth that is located above the midline of the body. The jaws are provided with robust teeth, 6 in the upper and 6 or less in the lower. It has a dorsal fin separated into two regions, a first formed by two long spines that are located just above the vertical of the eyes and usually have hidden in a horizontal position. The second region is formed by 43-49 soft rays and is located in the terminal part of the body. The anal fin is composed of 46-52 soft rays. The pectoral fins with 13-15 rays, caudal fin is rounded and narrow in height, and lacks pelvic fins. The base body color of Aluterus scriptus is greenish-brown to grayish, with irregular circles or short lines both in blue, along with black spots. Juvenile specimens usually lack the blue spots.

The alimetnación of Aluterus scriptus is very varied and consists among others in algae, hydrozoans, gorgonians, anemones and tunicates. 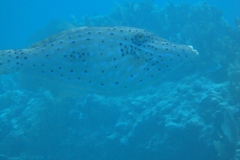 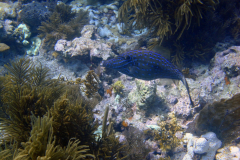