The Odonus niger, or also known under the name of red-toothed triggerfish, is a fish belonging to the family Balistidae and to the order Tetraodontiformes. It is usually found in coral reef regions with certain currents and depths of up to 40 meters. Its geographical distribution includes the waters of the Indian and Pacific oceans, from the Red Sea to Indonesia and from southern Japan to the Great Barrier Reef in Australia.

The body of Odonus niger can reach up to 50 cm if we include the long lobes of its caudal fin. Its body is oval and flattened laterally. It has a robust but small mouth that sits slightly above the horizontal line of the body. The dorsal fin is divided into two regions, a first one spiny and usually retracted in a horizontal position, and a second region that occupies the posterior half of the body up to the caudal peduncle. Symmetrically to this second dorsal fin, the anal fin runs ventrally. The pectoral fins are small in size. As a result of this reduced size of the pectoral fins, the movement of the specimens of Odonus niger is one of the most exotic among the fish. The second dorsal and anal fins move from one side to the other with a much greater amplitude than other fish. This movement between the two fins is synchronous. The caudal fin has the upper and lower rays much longer than the central rays. Odonus niger has a dark purple color with greenish-bluish spots on the head and light blue fin margins. Depending on their mood, feeding and water quality, they are able to slightly change the color of their bodies from purple to blue or blue-green. 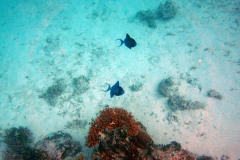 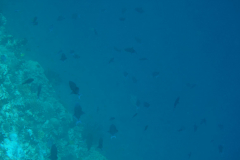 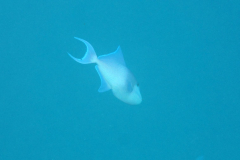 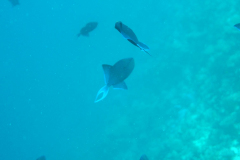