Caulerpa racemosa is a species of algae belonging to the Chlorophytes, whose distribution includes the eastern Mediterranean, Indo-Pacific and the Caribbean. In the Mediterranean sea, it is an invasive algae, which arrived during the 50s from the Red Sea, most probably through the Suez Canal, since its initial presence was mainly in ports with intense maritime traffic. We will find it on sandy and muddy bottoms, although sometimes it is also possible to observe it on rocky bottoms. There are several varieties within the same species.

Caulerpa racemosa has some erect branches (cauloid) (generally 10-15 cm high) that emerge from an horizontal stolon every few centimeters, which clings to the substrate with descending rhizomes that appear every certain interval of the stolon. From the branches arise a large number of ramifications (phylloids) in the form of clusters, in which their ends are oval or spherical structures. The color of the specimen ranges from green to yellowish green and blue-green.

From a Mediterranean environmental point of view, Caulerpa racemosa is considered a very aggressive species, since it grows extremely fast, forming dense tapestries of spherical structures with their cauloids and phylloids that cause an oxygen deficit, ending with almost all the benthic flora and fauna of its surroundings.

Numerous compounds of scientific interest have been identified and isolated from Caulerpa racemosa extracts. To give some examples, a compound has been identified that is capable of killing the larvae of the Culex tritaeniorhynchus mosquito, the main vector of transmission of Japanese encephalitis. Other compounds such as caulerchlorine and caulerprenylol have selective antifungal activity against certain species of fungi. Racemosins are another of the compounds isolated from Caulerpa racemosa, from which its capacity to attenuate the damage induced by the presence of the protein β-amieloid in cellular cultures stands out. Finally, caulerpine (with an anesthetic effect), caulerpicine (with antifungal activity and capable of lowering blood pressure) and the polysaccharide fraction (antiviral activity against herpes simplex virus) are other compounds identified from extracts of this species. 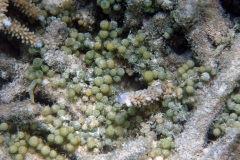