Codium bursa , known colloquially as green sponge ball, is a very striking Chlorophytas algae due to its large spherical shape (can reach 20-40 cm in diameter), which make it easily identifiable. The interior of the sphere is solid in juvenile specimens, however, as the specimens mature, the interior becomes hollow and is filled with water, adopting in the older specimens a compressed zone that is born in the upper part of the sphere, and if observed from above, it adopts a donut shape. We will be able to observe sometimes, small aggregations of individuals, the ones very close to the others. In these cases, the group of individuals adopts an undulating form. The lower part of the Codium bursa has root filaments that allow the specimens to be firmly attached to the substrate. The color of this algae is between green and blue-green, and to the touch its surface is velvety.

Geographically, Codium bursa is distributed throughout the Mediterranean Sea and part of the eastern Atlantic Ocean (from the coasts of Ireland to the Canary Islands). Although we will mostly find Codium bursa specimens in rocky areas, it is also possible to observe them in Mediterranean sandbanks, generally associated with Posidonia oceanica meadows. They inhabit waters below 5 meters deep and in regions with intense lighting, both on sandy and rocky bottoms. It is common to observe this algae on the shores of Mediterranean beaches dragged along after strong storms.

As a curiosity, it should be mentioned that each Codium bursa specimen is formed by a single giant cell which, with its multiple filamentous and intertwined branches, adopts its characteristic spherical shape. The reproduction of Codium bursa occurs between the months of September and December, and consists of the fragmentation of the stem. Each of the fragments generated will be at the mercy of the currents, and when they are deposited in a suitable place, they will cling to the substrate by means of the root filaments. 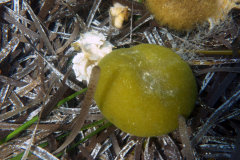 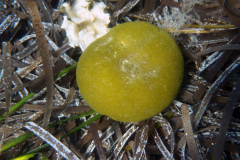 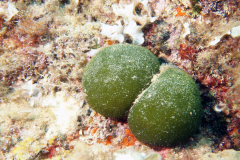