The appearance of Sabella pavonina is far from the image we all have of bristle worms. However, it is a species of bristle worms of which we only appreciate one part of the body. The specimens of Sabella pavonina live inside a slightly flexible and smooth tube, which the individual makes as it grows. The tube can be buried under the surface of the sand, until it reaches a depth of approximately 10-15 cm. A part of it may protrude slightly above the surface. Inside, we will find the Sabella pavonina specimen, which will only leave exposed to the outside of the tube the part of the body that makes up the fan formed by multiple filaments located in a radial way forming two crowns. These filaments have lateral ramifications that make the different filaments interlace between them to form a net.

Like all the species of the genus Sabella, the specimens of Sabella pavonina are great filterers, that extending their feathery tentacles, are able to filter the circulating water to capture the organic particles and microorganisms present. This passive filtering behavior, makes the observation of this species extremely relaxing, since the swaying movement of their feathered feet with the marine currents, transmits to the observer a relaxing feeling of weightlessness. Although they lack eyes, they do have photoreceptors that allow them to detect changes in luminosity. This is why, if we approach or pass over them, they are able to detect our presence, and quickly retract the duster inside the tube to protect themselves.

If we could observe the part of the body that is always inside the tube, we would see the different segments that characterize annelids. The body of Sabella pavonina can be orange, yellowish or grayish purple; while the coloration of the crown or duster is extremely variable, although with alternating patterns of dark and light bands. 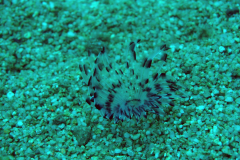 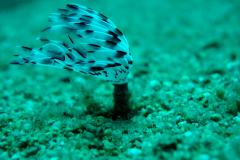 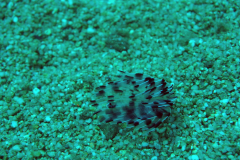 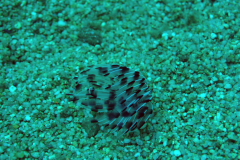 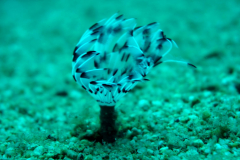 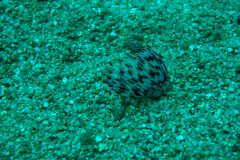 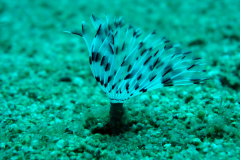 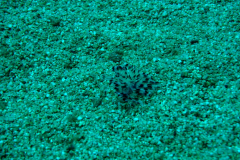 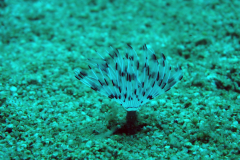 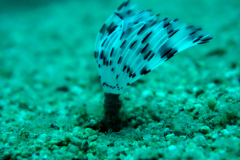 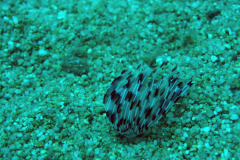