The appearance of Sabella spallanzanii is far from the image we all have of bristle worms. However, it is a species of bristle worms of which we only appreciate one part of the body. The specimens of Sabella spallanzanii live inside a slightly flexible and smooth tube, which the individual makes up with mucus mixed with sand, as the specimen grows. The tube may be partially buried under the surface, protruding considerably from the surface. In the interior of the tube, we will find the specimen of Sabella spallanzanii, which will only leave exposed to the exterior of the tube the part of the body that forms the fan, which can be a quarter (15 cm) of the total length that this species can reach: 60 cm. This fan or duster is formed by multiple filaments located in the form of two crowns, slightly arranged one on top of the other. These filaments of the crowns, have lateral ramifications, that make the different filaments interlace between them to form a net. Generally we will find on rocky substrates and very rarely on sandy or muddy bottoms.

Like all species of the genus Sabella, Sabella spallanzanii specimens are great filterers that extending their feathery tentacles, are capable of filtering the circulating water to capture the organic particles and microorganisms present. The use of Sabella spallanzanii specimens associated with aquaculture facilities has been studied. The filtering capacity of organic particles, as well as the ability to retain many of the bacteria present in the water, make this species a serious candidate as a biofilter and/or bioindicator associated with such facilities. On the one hand, they would allow the treatment of the waste generated by the aquaculture activity in the waters where they carry out their activity, serving at the same time as an effective bioindicator that would allow alerting about the presence of certain undesirable bacteria in the waters.

Although they do not have eyes, they do have photoreceptors that allow them to detect changes in luminosity. That is why, if we approach or pass over them, they are able to detect our presence, and quickly retract the duster inside the tube to protect themselves.

If we could observe the part of the body that is always inside the tube, we would see the different segments that characterize annelids. The color of the filaments of its crowns, is varied, although generally it is a pattern with stripes with orange, purple and white colors, although there are also specimens completely of a pale gray color.

Sabella spallanzanii is a species native to the waters of the northeast Atlantic Ocean, from the coasts of the United Kingdom and Ireland, to the waters of the Mediterranean Sea. There are records that this species has been introduced artificially into Brazil, Javea and Australia, most likely due to shipping traffic, carrying larvae in the ballast tanks of merchant ships. 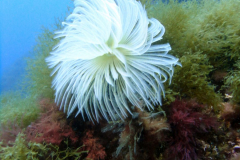 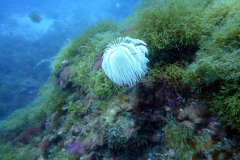 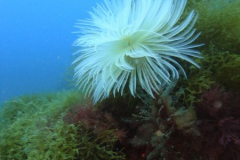 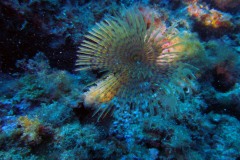