Aglaophenia pluma is a colonial cnidarians belonging to the class of the hydrozoans. Its colonies, which can be up to 15 centimeters long, take the form of a feather, hence its scientific name. The color of the colony is honey yellow, however the central axis of the feather can be a darker color. They are distributed throughout the Mediterranean Sea, as well as in the waters of the northeast Atlantic Ocean (from the French coast to the Canary Islands). They are organisms that live attached to the substrate, mainly rocky, from areas with the presence of currents and shallow waters.

The structure of a colony of Aglaophenia pluma has various types of zooids, each with a structure called hydroteca, in which they can contract. Globally, the colony is covered by a layer of chitinous nature, which acts as a skeleton for the colony. Among the different types of zooids present in the colony, most are specialized in capturing by means of their sticky tentacles, zooplankton or other organic particles that circulate in the water. These zooids are called 'gastrozoids'. Another type of zooid present in the colony, are those that have specialized to defend the colony. These zooids, which are called 'dactylozoids' have in their tentacles the characteristic cnidocytes cells of the cnidarians. These cnidocytes or stinging cells are fired at the slightest contact with an object foreign to the colony. Finally, the third type of specialized zooid, are the gonophores or gonotecs, zooids that are in charge of the reproductive tasks of the colony, although the colony may also be able to reproduce asexually by budding.

It is possible to confuse Aglaophenia pluma with other species of hydrozoans species such as Eudendrium racemosum or Tubularia spp. To distinguish this species from others, attention should be paid to its size and especially to the characteristic feather shape of the colony. It is possible to see certain species of nudibranchs and crustaceans on Aglaophenia pluma colonies. We especially highlight the ghost shrimp Caprella sp. and the nudibranch Doto koenneckeri. 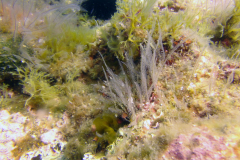 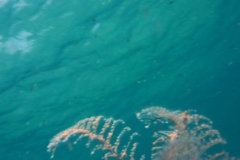 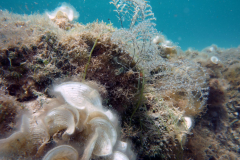 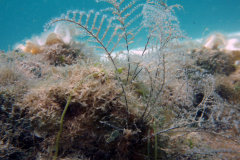 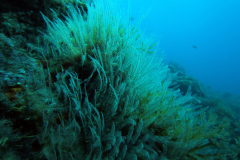