The Culcita schmideliana is a sea star classified within the class Asteroidea, the order Valvatidae, and the family Oreasteridae. It inhabits the waters of the Indian Ocean, from the coasts of Madagascar, the east African coasts, and the Red Sea, to the Chagos, the islands of the Philippines, Seychelles, Maldives, Sri Lanka and Australia. It is a very common species to observe in the intertidal zones of lagoons near coral reefs, as well as in the reef flats with the presence of sea grasses and seaweeds. Its bathymetric range is from surface waters to 90 meters depth. In the Pacific Ocean instead of the star Culcita schmideliana we find Culcita novaeguineae. Both share morphology, coloration, habitat type, behavior and feeding preferences.

Culcita schmideliana is a large sea star, which in appearance lacks the characteristic sea star arms. They have a pentagon shape, a leathery consistency and a very convex dorsal surface, and a flat base, giving it an inflated or globular appearance. Frequently in its body coloration pattern we observe several patches of different colors, being variable colors even in the same geographic region. On the aboral or lower surface of the animal, it has numerous conical spiculations of small size and reddish-violet color, which are also found surrounding the area before the mouth opening.

It is frequent that various commensal animals co-inhabit with Culcita schmideliana, both inside its cavities, as well as on the outside. In the stomach of this star, it is possible to find living a fish of the family of the so-called pearl fish or

Carapidae, which given its stylized body contour, find shelter from predators by entering inside the animal. Sometimes it is also possible to observe on the surface of this species the polychaete Gastrolepidia clavigera or shrimp of the species Periclimenes soror. The latter are usually found on the aboral surface of the specimen, where due to their coloration they go completely unnoticed.

Its diet is varied, including among its prey small microorganisms, algae and some coral polyps. Although Culcita schmideliana can feed on corals, unlike Acanthaster planci, in this case given the morphology of the star and its lack of flexibility, it is not able to reach the large branching corals of the reef. Therefore, it can only feed on small coral colonies. 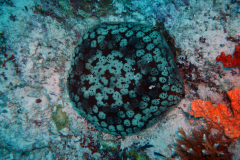 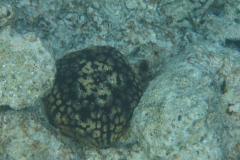 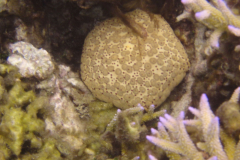 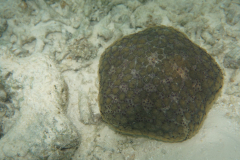 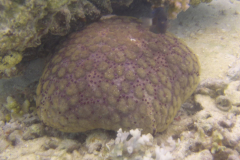 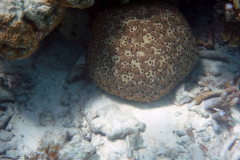