Prostheceraeus moseleyi is a flatworm species that belongs to the Polycladida order and the Euryleptidae family. Specimens of this species are found in relatively shallow waters of about 30 meters deep, on rocky bottoms and/or with abundant algae and ascidians, both in the eastern Atlantic Ocean and in the Mediterranean Sea waters.

The body of Prostheceraeus moseleyi is very flattened dorsoventrally flattened (typical of flatworms), can reach 3-4 cm of maximum total length and its leaf-shaped. The margins of the body on the sides are folded. In the cephalic region, the margin forms two prominent tentacles that have a purple hue and whose apices are whitish in color. As for the coloration of Prostheceraeus moseleyi, the body is whitish, with a more or less irregular black stitching, with the edge of the body decorated with a thin yellow line that runs around its circumference. There are specimens whose bodies are much more violet than whitish.

Specimens of Prostheceraeus moseleyi are capable of swimming moderate distances. By means of an undulatory and rytmic movement of their body, they are able to move through the water column with great elegance and attractiveness, which is worth seeing.

Prostheceraeus moseleyi is a hermaphrodite species with cross-fertilization. Each individual fertilizes eggs with sperm transferred and stored from the other specimen. Also, given the great self-regenerating capacity of this species, and planarians in general, reproduction by fission is also possible. 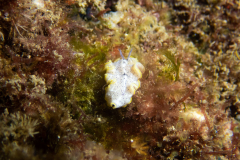 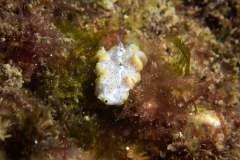