The Clavelina lepadiformis is a species of colonial tunicate, belonging to the order Aplousobranchia and within it to the family Clavelinidae. We will find this species in waters up to 50 meters deep in mainly rocky bottoms, especially under rocky ledges or attached to buoys or floating elements, as well as at the base of certain algae. Its presence occurs in the waters of the Mediterranean Sea, the eastern Atlantic, North Sea, and the Baltic Sea.

Clavelina lepadiformis is a colonial species, in which the different individuals of a colony are independent of each other, although they are located very close to each other and united at the base. Generally, colonies usually consist of 20 to 30 individuals. Each of the individuals that make up the colony are called zooids and can reach up to 3 cm in height. The body of the zooids is cylindrical, gelatinous in appearance and transparent in color except for a delicate and thin white band (although it can be yellow or even pink) surrounding the body openings, as well as longitudinally from the base of the zooid to the openings.

The feeding of Clavelina lepadiformis, as with the vast majority of tunicates, is by filtering the surrounding water column. Among the prey it captures by filtering the water, we find algae, plankton or any organic matter present in the water.

It is an annual species, which begins its development approximately during the months of September - October, reaching its maximum development just before the summer months, months during which we will not find adult specimens. It has the ability to reproduce either by asexual or sexual reproduction. Generally, during the months of March to June, the individuals of the colonies develop yellow-orange granules inside their body cavity, which contain the reproductive gametes. These are released into the current to produce fertilization and after the larvae spend a free period, they settle on the substrate to generate a zooid. This zooid will reproduce asexually to form a colony of 20 to 30 zooids. 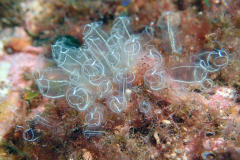 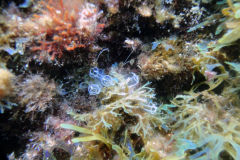 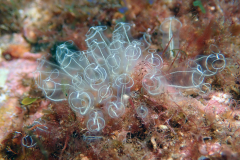