Pinna nobilis is a bivalve mollusc of the order Ostreida and family Pinnidae. It is an endemic species of the Mediterranean Sea and the largest bivalve present in Europe. It prefers protected waters in bays, at depths of up to 40 meters, although there are records of some specimens up to 200 meters deep. It is quite delicate in terms of water conditions, requiring well-lit and crystalline waters, with little variation in temperature and salinity. They live semi-buried vertically in areas of soft sediment such as sandy or muddy areas, and are often associated with Posidonia oceanica or Cymodocea nodosa meadows.

The shape of the shell of Pinna nobilis is slightly different depending on the geography in which we find them, although what is common to all of them is that one side of the shell is rather pointed (by which they are stuck in the substrate), and the other end of the shell is rounded and wider. The color of the shell is orange-brown on the outside, and covered on the inside with shiny mother-of-pearl. In fact, pearls have been isolated from some specimens. They can reach up to 120 cm shell length and live for more than 50 years.

Pinna nobilis is currently in serious danger. During the last few years, several episodes of high mortality have occurred among the colonies of this bivalve. The protozoan Japlosporidium pinnae has been identified as the cause of the infection and trigger of the death that has rapidly decimated the colonies in southern Spain and the Balearic Islands, with mortalities sometimes of 100% of the specimens.

As usual in bivalves, Pinna nobilis feed by filtering the water around them. They capture in this way the plankton and organic particles that are present in the water. It is an extremely sensitive species to water pollution.

The reproduction of the nacre is hermaphroditic, generating both male and female gametes in the same individual. Both gametes are released into the water during the months of June to August, when fertilization occurs and a planktonic larva is formed. After a few days of free larval life, the larva will have already generated a thin calcareous shell, which will allow it to descend and attach to the seabed.

It is possible to find in the specimens of Pinna nobilis, a small parasite of about 1 cm in length. It is a crab, Nepinnotheres pinnotheres, which is usually found in the mantle of the nacre. 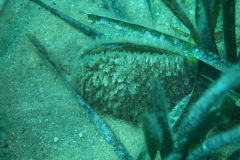 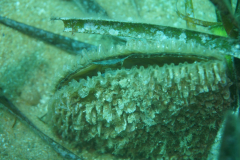 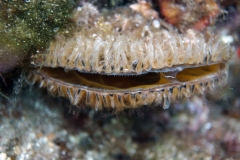