Spondylus varius is a species of bivalve mollusc belonging to the order Pectinida and within this, to the family Spondylidae. It inhabits the waters of the Indo-Pacific Ocean, where it is found on coral substrates in intertidal areas. This clam is embedded in the coral bottom instead of using the byssus to cling. They live at depths of at most 20 meters.

The two shells Spondylus varius are joined together by a system formed by a ball-shaped protuberance, which pivots on a hollow in the opposite shell. This species is part of the so-called spiny clams, and this is because their shells have extensions that resemble spines. Their size can reach 20 cm in diameter. They have an extremely striking mantle due to their coloration. It has bright colors such as yellow, blue, violet, black and white, with which patterns are drawn with stripes, dots and spots, which certainly will not go unnoticed. The edge of the mantle is usually puckered, and has numerous photosensitive centers or eyes along the edge of the mantle, which allow it to detect lights and shadows and thus determine if a predator is approaching, before which it will quickly close its valves to stay safe. At the intersection between the mantle and the shell there is usually a line of dark ace color along the entire opening of their shells.

As usual in bivalves, Spondylus varius feed by filtering the water around them. They capture in this way the plankton and organic particles that are present in the water.

Regarding reproduction, this species is a protandric hermaphrodite, which means that all individuals are born as males, and with the course of their existence are transformed into females. Both males and females release their gametes into the currents, so that fertilization takes place and the larva is formed. The larvae will become part of the plankton for a few days and then descend and cling to the seabed.

It has been described that various extracts made from specimens of this species have proven to be effective in combating liver damage. 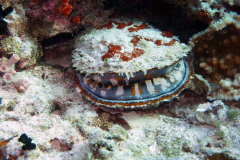 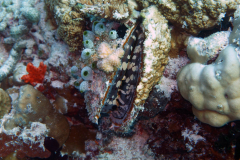 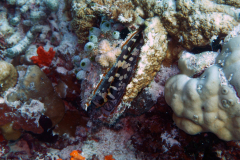