The species of the genus Tridacna are known as giant clams. There are 10 species within the genus: Tridacna crocea, Tridacna derasa, Tridacna gigas, Tridacna lorenzi, Tridacna maxima, Tridacna mbalavuana, Tridacna noae, Tridacna rosewateri, Tridacna squamosa, Tridacna squamosina. They are characterized by having between 4 and 7 undulations in both shells, and with the exception of Tridacna derasa, they have rows of lobed scales that run parallel to the upper margin. They have a specialized organ that allows them to be anchored to the substrate, this is known as byssum and emits some filaments that are firmly anchored to the substrate. The mantle of these molluscs has two siphons, one whose opening is at the level of the mantle and may have some small tentacles with which to avoid large particles, which is the siphon through which it introduces water into the body (inhalant), the other siphon, conical in shape, protrudes clearly from the surface of the mantle.

The most striking feature of this species, apart from its large size, is its impressive colors of the mantle, having among its chromatic repertoire, brown, yellow, blue, purple, green, white and black, sometimes with striations, speckles or prints, as well as color combination. Differentiating between the 10 species of Tridacna sometimes seems complicated due to the great similarity between species. Some of the characteristics that will allow us to differentiate them are

We can find the Tridacna on sandy bottoms and among the reef corals, usually in shallow, very sunny waters without large currents. Between 75 and 90% of their food needs are covered by the unicellular algae (zooxanthellae) that live in symbiosis in the mantle of these bivalves. The algae carries out the photosynthesis generating oxygen and sugars that are shared with the clam. The rest of their nutritional needs are covered by filtering the water around them, thus capturing plankton and organic matter dissolved in the water. 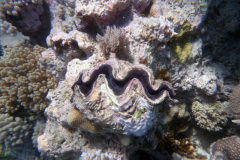 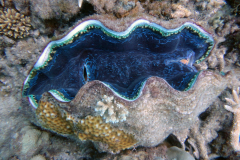 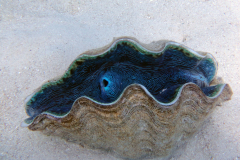 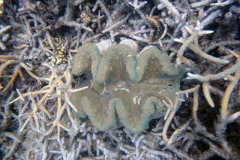 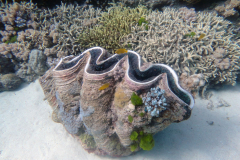 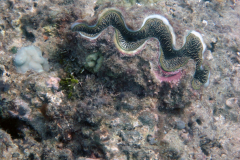 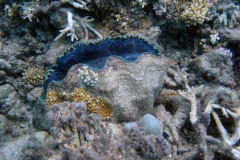 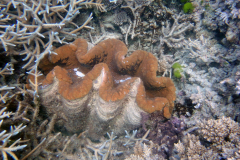 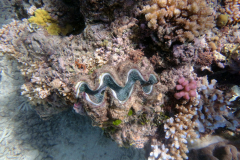 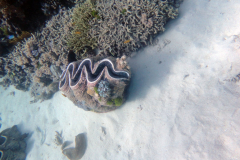 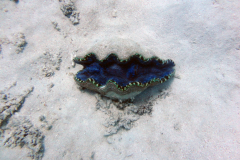 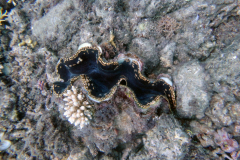 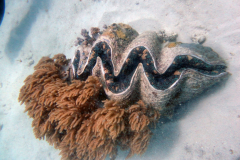 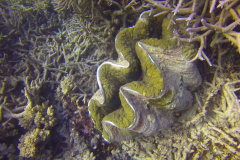