Plakinastrella ceylonica is one of the 112 sponges described within the Plakinidae family, which in turn we find within the Homoscleromorpha class. This species inhabits the waters of the Indian and Pacific Oceans, where it is found predominantly on the walls and ledges of coral reefs or on rocky bottoms of up to 15 and 25 meters deep. This species of sponge finds the optimal conditions for its growth and reproduction in environments that despite being shallow, have a dim or even completely absence of lighting, such as the lower parts and caves of coral reefs.

The size that a specimen of Plakinastrella ceylonica can reach is about 17-20 cm in diameter, and it can grow both encrusting on the bottom, or forming a more or less cylindrical mass. In either case, it is a sponge with an irregularly shaped body, rough in appearance but generally soft to the touch and whose color can be between yellow and grayish, depending on the individual.

The feeding of Plakinastrella ceylonica, as with almost all sponges, is done by filtering organic particles present in the water. The water is introduced into the body of the specimen through the tiny inhalant pores present throughout its body. Here it is worth noting a distinguishing feature of species such as Plakinastrella ceylonica belonging to the class of homoscleromorpha, and that is that the cells lining the internal body cavity, called endopinoacocytes, have a flagellum by which they manage to generate this current necessary to filter the particles. Once the water surrounding the specimen is introduced into its cavity, the organic particles present are trapped and the water is expelled through the exhalant pores generally located in the most apical part of the specimen. 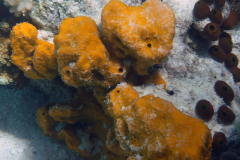