Didemnum molle is a small-sized colonial ascidian species, native to the waters of the Red Sea and the tropical waters of the Indo-Pacific. The colonies are formed by individuals firmly attached to the substrate, being able to form extensive colonies in the rocky habitats of the reefs. Probably Didemnum molle is the most frequent tunicate that we can observe in the Indo-Pacific reefs. Each individual or zooid has a rounded and urn-shaped body with a diameter that can reach up to 10 cm.

The characteristic tunic or body wall present in this phylum of species, is flexible, but at the same time robust. Didemnum molle tunic is crossed by a multitude of small pores, called mouth siphons, through which they inhale water, that will later pass through the internal chamber to exit through a main upper opening. With this movement of water, the individual is able to filter plankton, from which it feeds. Generally, the colonies are white, with brown and green regions. The intense green color of the interior of its chamber is due to the presence of cyanobacteria (Prochloron didemni) on its surface and in its tissues, establishing a symbiotic relationship with Didemnum molle. In shallow waters, the colonies are usually small in size and very intense in color, while the colonies located at greater depths have larger individuals and their coloration tends to be more grayish and brown.

Didemnum molle specimens, despite being sessile organisms, have a certain degree of 'mobility' if we focus on the entire colony. They are able to divide their zooids and slowly colonize the coral branches to find the area with the intensity of sunlight they need. During this process, the zooids present at the lower base of the colony, detach their tendrils that used to cling to the substrate, and on the opposite side of the colony, at the top, new tendrils are formed in front of the zooids. As a result, and if we look at the whole process, the Didemnum molle colony could be considered to 'walk' on the corals, although extremely slowly in time.

It can be confused with Atriolum robustum in appearance; to differentiate it one must observe if it has pores in the body wall that connect the walls of the tunic with the chamber, which are characteristic of Didemnum molle.

Finally, and as an additional point of Didemnum molle, scientific studies have shown that the use of extracts of this species has an insecticide activity against various species of mosquitoes (Anopheles maculatus and Aedes aegypti). 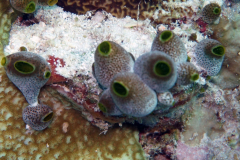 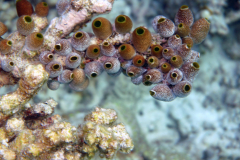 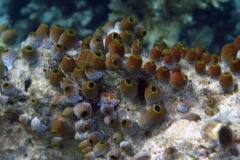 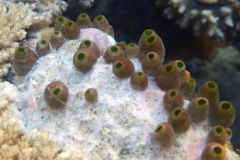 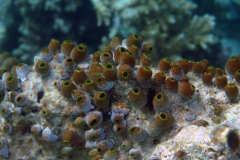 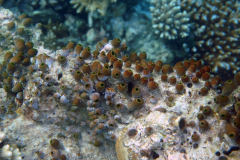 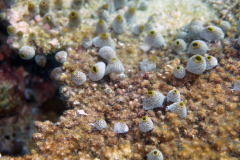