Halocynthia papillosa is a species of tunicate belonging to the order Stolidobranchia and within it to the family Pyuridae. Described for the first time in 1767 by Linnaeus, it is an ascidian that we will find either fixed to rocky bottoms, or on the substrate in Posidonia oceanica meadows. They prefer places with dim lighting and not very strong currents. It can be found throughout the Mediterranean Sea, in waters between 5 and 50 meters deep.

The body of Halocynthia papillosa is red or orange, cylindrical, rough or rough-looking, and can reach 15 cm in length. Two openings or siphons stand out from the body. One of them, the one with the largest diameter, is located at the upper end of the body and is the one through which it captures the water to filter it (also called inhalant siphon). The second siphon, called the exhalant siphon, is smaller and is located in the upper third of the body, on one of the sides, and is the siphon through which the water that has already been filtered is expelled. Both siphons have rigid fibers that run along the edge of the siphons. Halocynthia papillosa will contract if disturbed, closing its siphons. The upper siphon closes forming a cross between its four lobes. The lateral siphon closes with two lobes.

The red sea-squirt is generally a solitary species, although sometimes we can observe it forming small groups of no more than 2 or 3 individuals.

As for the reproduction of Halocynthia papillosa, it is a hermaphroditic species in which both eggs and sperm mature at the same time. The gametes are released to the outside during the months of November, when fertilization of a sperm to an ovule will occur to form a larva. The larvae formed will spend from a few hours to a few days in a planktonic free-living stage, to later settle on the bottom. At this point it will undergo a metamorphosis process to give rise to an adult specimen that will grow until it reaches a height of 15 cm. 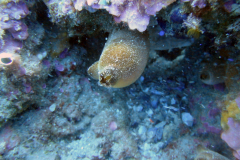 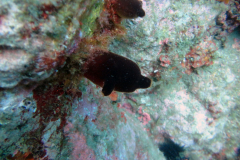