The Forkbeard, or Phycis phycis is a fish belonging to the order of the Gadiformes, and more specifically to the family Phycidae. It is a predominantly benthic species, living in waters up to 650 meters deep in the eastern Atlantic Ocean, from the Bay of Biscay to the Western Sahara, including the islands of Cape Verde, Azores and Madeira. It is also present in the Mediterranean Sea.

The body of Phycis phycis is fusiform, decreasing its diameter as the length of its body decreases, ending in a caudal peduncle. In total, the maximum length that this species reaches is 60 cm, although the most common is to observe specimens between 25 and 30 cm in length. They stand out from their anatomy, the chins, located in the lower jaw and moderately long that are used for as sensory organs. The dorsal fin of Phycis phycis is divided in two regions, a first one of short height and formed by 10-11 rays and that is born at the height of the base of the pectoral fins; and a second one much longer that reaches almost the end of the body and that consists of 60-63 rays. The anal fin is slightly shorter than the second dorsal fin, and is formed by 58-64 soft rays. The pelvic fins are very reduced in their width, forming a long filament that reaches the height of the sewer of the specimen. Finally, the caudal fin has rounded margins. As for the coloration of the body of Phycis phycis, the brown-reddish color predominates in the dorsal part, while the ventral part has the same color, but in a paler tone. Both the dorsal, anal and caudal fins have the distal part of darker color, and narrow margins of whitish color.

Phycis phycis is a species of markedly nocturnal habits. During the day it remains hidden among the rocks or inside caves or cracks. At night, when this species is most active, it comes out of its dens to capture its prey, among which we find small fish and invertebrates.

During the months of January to May, it is the time of the greatest reproductive activity of Phycis phycis. 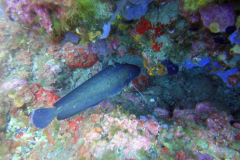