The Conger conger or commonly known as conger eel, is a fish that can reach up to 3 meters in length in female individuals, and 1.5 meters in males. Its body is elongated and anguiliform with the front part almost cylindrical and the back part flattened laterally. It is a fish that lacks scales, being its skin smooth and very thick. It also has no ventral fins, while the pectoral fins are highly developed. Both the dorsal fin, formed by between 270 and 300 soft rays, and the anal fin, formed by between 205 and 230 soft rays, are confluent with the caudal fin. It should be noted that the dorsal fin originates from the vertical formed by the posterior edge of the pectoral fins. The pectoral fins are relatively short and consist of 17-20 rays. The head is conical, with a terminal mouth, very wide and extending beyond the eyes. The upper jaw is somewhat longer than the lower jaw. It has olfactory orifices located on the side of the face, as well as pores of about 2 mm in diameter, light colored and forming part of the anterior lateral line. The gill openings are large, positioned laterally and anterior to the bases of the pectoral fins.

Conger conger is a fish with marked nocturnal habits. During the day it stays hidden in crevices. It feeds on fish, crustaceans and cephalopods during the night. For reproduction, they move during the summer months to deep waters, where the female spawns between 3 and 8 million eggs. It is believed that the parents die after mating. The larvae live for the first two years as planktonic forms in the larval stage at great depth. Once they reach 15 cm, the larvae undergo metamorphosis to become adults, migrating to shallower waters. 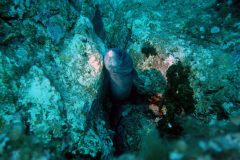 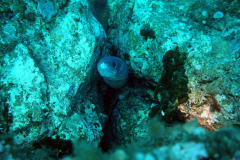 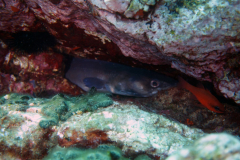