Echidna catenata is one of the 11 species belonging to the Anguilliformes order, within the Muraenidae family and Echidnagenus. This species of Anguilliformes inhabits the waters of the western Atlantic Ocean (from Bermuda, Florida and Bahamas to the West Indies and Brazil), as well as the eastern Atlantic Ocean from Angola to the Cape Verde Islands. We will find specimens of this species inhabiting rocky and/or sandy areas of up to 20 meters deep.

The body of Echidna catenata is the one characteristic of an Anguilliformes, that is to say elongated, slightly flattened laterally and with a continuous dorsal fin that joins the anal fin at the end of the tail. The maximum length of this species is 160 cm, although it is most common to observe specimens of 60-70 cm in length. The head ends in a relatively rounded snout and its jaws have several rows of teeth. It has two pairs of nostrils. The anterior pair is tubular in shape, while the posterior pair, located just above the eyes, consists of a small dimple surrounded by a thick ridge. Behind the head, on the sides we find the gill openings, which are small in size and adopt a slit-like shape. It lacks pectoral and ventral fins, as well as scales covering its body. Instead of scales, Echidna catenata secretes a mucus that gives them protection and makes them very slippery. The body color is usually dark brown or blackish with interconnected yellowish spots forming a reticulated pattern.

During the day, we will find Echidna catenata specimens hiding in holes in rocks, and it is during the night when they come out of their dens in search of their prey, crustaceans and small fish. The teeth in its mouth, which are relatively blunt, are adapted to feed on crustaceans, crushing their shells without any problem. 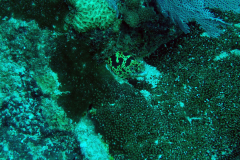