Gymnothorax moringa is a species of the family Muraenidae within the order Anguilliformes. They are common in shallow waters of both reefs, rocky regions and even seagrasses, with depths of between 0 and 50 meters. Its geographical distribution is wide and includes the waters of the western Atlantic Ocean, from North Carolina to Brazil, being present in all the islands of the Caribbean Sea.

The body of Gymnothorax moringa is elongated (generally 80-100 cm), strong, very muscular and moderately compressed towards the end of the specimen's body. The head is of a moderate size, with eyes also moderate in size and tubular nasal appendages in a slightly lateral position. Its jaws exceed the vertical of the eyes and are of medium size. They have numerous smooth teeth, of which long fangs stand out. Behind the jaws, and located centrally on both sides, we find the gill openings, which take a round shape. At the height of the gill openings and in the dorsal part of the specimen, the dorsal fin starts. It runs along the entire length of the body, merging with the anal fin. They lack both pectoral and ventral fins. The base color of Gymnothorax moringa is a pale yellow, which a pattern of dark spots that overlap each other and whose colors are variable between specimens, but ranging from reddish-brown to purplish black. In certain specimens, the dorsal fin may have the front margin black and white in the rear half of the specimen. It is important to highlight the coloring of the juvenile specimens, since it is far different from that of the adults. The juveniles lack the pattern of spots, being completely dark with the exception of the lower jaw which is whitish in color, adopting an appearance very similar to Gymnothorax vicinus.

Gymnothorax moringa is a solitary species, with benthic habits and that we will be able to find frequently hidden in narrow cracks of the rocky bottom, from where only its head appears. They are active during the day, at which time they prowl the rocky areas to capture their prey, among which we find mainly crustaceans, invertebrates and small fish.

It is necessary to comment, that it is a species that can be very aggressive. Cases have been reported of individuals attacking swimmers without provocation. 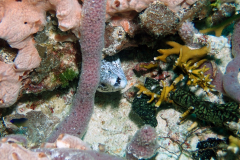 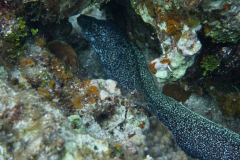 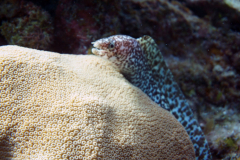 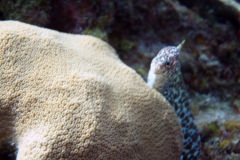 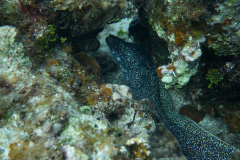