Muraena helena, or Mediterranean moray is a species of marked nocturnal character, although during the day we can find them in cracks and rocky holes where they are kept. They have an elongated body (1.5 meters long), anguiliform and very robust, flattened laterally towards the rear, which lacks scales. In contrast to the absence of scales, Muraena helena has a viscous skin due to a mucous secretion that protects them from any injury to their body. It has gill slits of reduced size and rounded shape, as well as two posterior tubular olfactory orifices located near the anterosuperior edge of the eyes. Mediterranean moray eels, and in general the species of the genus Muraena have a somewhat limited view. However, they supplement their limited vision with an extremely developed sense of smell which they use along with their lateral line to detect (mainly at night) and subsequently capture their prey.

The developed dentition is very striking, with strong, large conical teeth slightly tilted backwards. Although the diver is only able to observe the mandibular dentition, there is a second inner jaw, which is protractile and used to introduce the prey into the animal. The head of this species is slender, with small eyes and a mouth opening that exceeds the vertical formed by the eyes.

The coloration of the body can be very variable, generally the young specimens usually have bluish tones, while the adult specimens have a brown, yellowish coloration, with a marbling based on dark and light spots, with the edge of the fins light.

It is a territorial species, which feeds on fish, gastropods, cephalopods and crustaceans. The Muraena helena has an oviparous reproduction, which is very little known. Sometimes it is possible to find them in a symbiotic relationship with the shrimp Lysmata seticaudata. 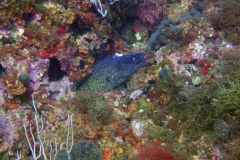 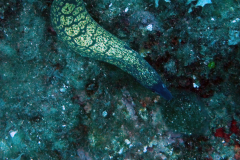 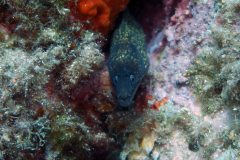 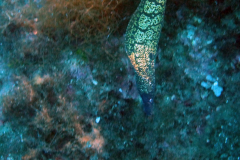 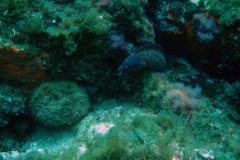 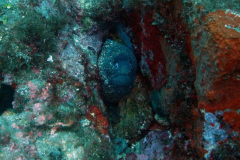 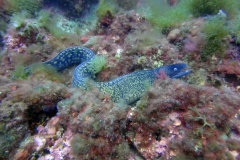 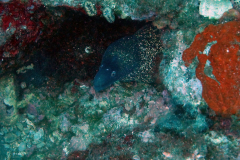