Ophisurus serpens or known also under the name of gigant snake eel, is a species belonging to the family Ophictidae within the order Anguilliformes. It is a species whose geographical distribution includes the Mediterranean Sea to the north and the entire Atlantic coast of Africa to South Africa to the south. It is also present on the western coasts of the Indian and Pacific Oceans. Habitual of the sandy/muddy bottoms, in which it buries its elongated body and only lets its head show, so it often goes unnoticed.

Ophisurus serpens has a very elongated and thin cylindrical body, that can reach a maximum size of 2.5 meters in length (although it is normal to see specimens between 0.5 and 1.5 meters). Its head adopts a pointed form in which its mouth extends beyond the vertical to which the eyes are. It has fine jaws with sharp teeth that form two rows on both jaws, with longer canine teeth on the front, as well as a row of teeth on the palate. The dorsal fin is born behind the pointed and short pectoral fins, located just behind the gill openings. The pectoral fin runs along the entire length of the body except for the last few centimeters of the tail. Therefore the tail takes a pointed shape and lacks at its end dorsal and also anal fins. The animal's anus is located a little before the middle of its body, and after it the anal fin starts, runing almost to the end of the tail. It lacks both caudal and ventral fins. The coloration of the body of Ophisurus serpens is light brown-green, and the young specimens have a silvery color. After the eyes, the body has a series of black points, whose number varies as the specimen grows, having reported a maximum of 204.

As we have commented at the beginning, Ophisurus serpens lives buried in the sandy/muddy bottoms during the day, and it is during the night when this species is more active, and leaves the bottom to capture its prey, among which we find benthic invertebrates and fish. 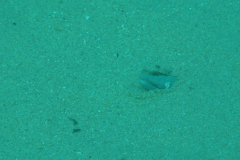 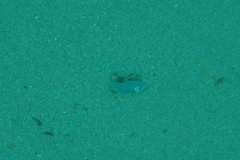