The huge Rhincodon typus is the largest living fish in the world, reaching 12 meters in length. With a size comparable to that of a whale and being a species of shark, it is known as the whale shark. It is a species of elasmobranch that has inhabited the warm waters of tropical and subtropical seas for sixty million years. The belly of this species is completely white, while the back is a dark gray color, stained with a multitude of dots and horizontal and vertical lines between white and yellowish that give it a resemblance to a chess board. These spots and lines are very variable among individuals, and it is used as a way to identify specimens.

The body of the whale shark is elongated, robust and very hydrodynamic in shape. The head is large, wide and flattened and the eyes are located on the sides, which are small. Its mouth, as well as its head, is of great dimensions, being able to measure up to 1.5 meters wide. It has 5 large pairs of gills. It has two dorsal fins, and the pectoral fins are very robust. In young individuals, the upper lobe of the tail fin is larger than the lower lobe, while in adult specimens, both lobes are similar in size adopting a crescent shape. Despite the large size of this species, its movements are very calm and slow, moving at an average speed of 5 km / h.

The Rhincodon typus is, along with the basking shark (Cetorhinus maximus) and the sandbar shark (Megachasma pelagios), the only species of shark that feeds by filtration. By ingesting large quantities of water, they filter out any organism or particle larger than 2-3 millimeters in diameter with their gill combs. Among the species of which it feeds, we can highlight the phytoplacton, necton, macroalgae and krill, although it is also capable of feeding (although less frequently) on crustaceans, squids and schools of small fish. The whale shark does not need to move forward while feeding, and is often observed in an upright position and moving up and down while actively pumping and filtering the water, unlike the basking shark (Cetorhinus maximus), which has a more passive way of feeding and does not pump the water, but rather swims the water towards its gills.

Despite the enormous size of this species, and the fact that it is a shark (generally mistakenly associated with aggressive and dangerous animals), the whale shark is a species that does not pose any danger to humans. In fact, it is a very curious and playful species with divers, which we can approach without any problem, always respecting the individual and avoiding the area of the tail fin, which could involuntarily hit us as a result of the swimming movement of the animal itself.

Many aspects of the whale shark remain unknown to this day. For example, there is very little information available about their reproduction or migratory patterns. 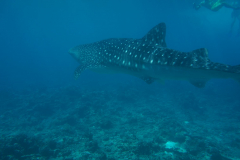 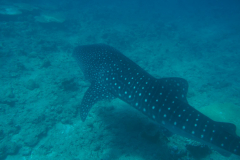 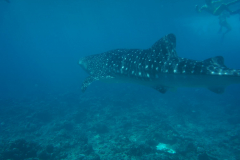 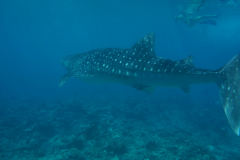 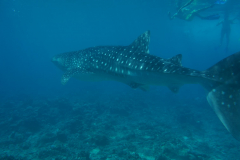