The zebra shark (Stegostoma fasciatum) is a elasmobranch species belonging to the Orectolobiformes , the only one of the family Stegostomatidae, which inhabits the Indian and southwestern Pacific Oceans. The coloration of its body is yellowish gray with numerous points of a darker color when they reach sexual maturity, while young specimens have whitish or yellowish stripes along black lines.

The major distinguishing features are on the one hand the presence of five longitudinal ridges on the upper part of the back, which are born behind the head and reach the tail. One of these crests is located in the middle part of the animal's dorsal, while on each side there are two more crests. The second distinguishing feature of the zebra shark is its enormous caudal fin, which can account for almost half of the individual's total length. The total length that can be reached by adult Stegostoma fasciatum individuals is 2.5 meters. It has two dorsal fins placed very close together and located in a fairly posterior position. Its mouth is located in the lower part of the head (subterminal position), with which it feeds on gastropods and bivalves, although occasionally crustaceans and even some fish are part of its diet. The eyes are small and are located on the sides of the head. Immediately behind them, we can observe on each side a spiracle of similar size or somewhat larger than the eye.

Although Stegostoma fasciatum is usually seen alone, at certain times they are concentrated in very large groups. It is an active species during the night and during the day it spends most of its time resting on the seabed. This species does not pose any danger to the diver, since its calm and immobile behavior during the day allows one to approach the zebra shark without any complications or danger, as long as one does not make any sudden movements or maintain a non-aggressive and respectful attitude towards Stegostoma fasciatum.

Stegostoma fasciatum is an oviparous species. The females, after fertilization, deposit several dozen egg capsules, which cling to the environment by means of filaments located in the corners of the capsule and which are of a sticky nature. 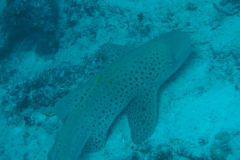 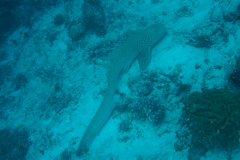 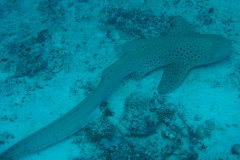