Carcharhinus leucas is a large and robust shark belonging to the class Elasmobranchii, order Carcharhiniformes, family Carcharhinidae and genus Carcharhinus that usually inhabits shallow coastal waters although it can be observed up to 150 meters deep. It can be found in salt water as well as in estuaries where it can enter rivers and even lakes. The distribution of this species is very extensive, being present in all continental waters of tropical and subtropical seas (Atlantic, Indian, Pacific).

The maximum length that specimens of Carcharhinus leucas can reach is 3.4 meters, although the most common is to observe specimens of about 2.6 meters. The rostrum of this species is rounded and short. Two nasal openings with a small triangular-shaped lower nasal fin stand out on its face. The eyes are small and have nictitating membranes. The mouth has numerous strong teeth. In the upper jaw the teeth are triangular in shape with finely serrated edges. Just above the base of the pectoral fins there are 5 gill slits. It has two dorsal fins, the first is moderately high and wide and its size is approximately three times that of the second dorsal fin. This first dorsal fin, which is located slightly in front of the insertion of the pectoral fins, has a convex anterior margin and a pointed or slightly rounded apex. The anal fin has a serrated margin, the pectoral fins are large and broad, with narrow and pointed tips.

The color of Carcharhinus leucas is grayish on the dorsal side, with the belly completely white, and the tips of the fins darker, especially in juveniles.

Carcharhinus leucas is an opportunistic predator, with a wide range of species on which it can feed. Among them we find fish, other sharks, rays, a multitude of invertebrates, turtles, birds, mammals and in general carrion. Its powerful and robust mouth, with its razor-sharp teeth, allows it to dismember relatively large prey with ease.

The reproduction of Carcharhinus leucas is viviparous, with a gestation period between 10 and 11 months, and in each litter the number of offspring is between 1 and 13. Males mature sexually when they reach sizes between 1.5 and 2.2 meters, and females between 1.8 and 2.3 meters. Generally, females enter estuaries and river mouths to give birth to hatchlings. The birth of the young occurs in late spring or early summer. 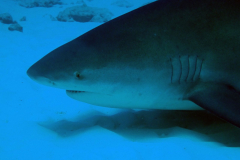 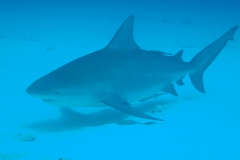