The blacktip reef shark (Carcharhinus melanopterus) is a species of the family Carcharhinidae belonging to the order Carcharhiniformes. It is one of the most frequent shark species in the tropical reefs of the Indian and Pacific Oceans, both in coastal waters (generally preferring shallow waters around reefs) and in offshore waters of continental and insular shelves. There are some records of Carcharhinus melanopterus sightings in the waters of the eastern Mediterranean Sea (from Tunisia to Israel), although their presence raises some concerns.

The body of the blacktip reef shark is elongated (up to 2 meters in length, although 1.6 meters is common) and hydrodynamic. Its color is light brown to gray on the dorsal side and white on the ventral side. It has a short but wide and rounded snout, with large size horizontally oval eyes. Each of its jaws usually have 11 or 12 rows of teeth. The teeth of the upper jaw have a serrated surface and are slightly tilted back, while the teeth of the lower jaw are straight and also have serrated cusps. The fins of Carcharhinus melanopterus are generally large. It has two separate dorsal fins. The first dorsal fin is born at a height equivalent to the vertical of the end of the pectoral fins. The second is moderately tall, although shorter than the first, and starts at the same height as the anal fin. The caudal fin is heterocercal, that is, its two lobes are of different size, with the upper one being much more developed than the lower one. The contour of the tail fin has a black coloring. Similarly, the apical end of the first dorsal fin and the lower lobe of the tail fin are deep black. Occasionally, the second caudal fin, anal fin, ventral and pectoral fins may have black tips.

Carcharhinus melanopterus is a territorial and somewhat aggressive species, although generally not a great danger to humans. This is due in part to its size, but also to its generally shy attitude if we approach them. However, their shy character changes suddenly and radically if we are spearfishing and have just caught a fish. In this situation is where more accidents between the human and this species have occurred, since they try to capture the fish wounded by the harpoon, thing that they will not doubt to do. Despite this, in general it is a solitary species or one that forms small groups. They are active swimmers, which predominantly move in mid-water or near the seabed.

The feeding of Carcharhinus melanopterus is mainly based on bony fishes such as jacks, leiognathids and monacanthids, although occasionally they also feed on cephalopods.

The specimens reach sexual maturity when they grow to 91-112 cm in length. Carcharhinus melanopterus is a viviparous reproductive species, which is capable of producing between 4 and 14 offspring per litter. Its gestation period is between 12 and 16 months, after which the females migrate to coastal waters, during the late winter to early summer, to give birth to offspring that at birth measure between 33 and 52 cm in length.

At present Carcharhinus melanopterus is classified by the International Union for Conservation of Nature (IUCN) as an almost threatened species. 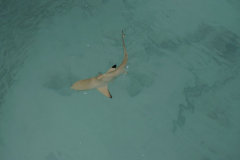 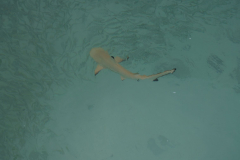 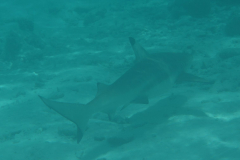