Triaenodon obesus is a species of shark belonging to the order Carcharhiniformes, which is colloquially known as the white-tip reef shark. It is one of the most common sharks in the Indo-Pacific coral reefs. Its geographical distribution is extremely wide, from the east coasts of Africa and the Red Sea, to the tropical islands of the Pacific, regions in which its presence is frequently associated with the crystalline and coastal waters of the coral reefs. The range of depths in which Triaenodon obesus moves is very large, from the surface to 330 meters deep, although most of the time they spend at depths less than 40 meters.

The body of Triaenodon obesus is slender, with a short head, but wide and flattened. The mouth is inclined downwards, and in its interior we find teeth with smooth edges and small size in both jaws. The eyes are horizontally oval and have vertical pupils. We highlight from the eye region, prominent ridges on the eyebrows that give the face a sarcastic appearance. The color of its body is gray, being more intense in the dorsal part and more blurred in the ventral part, with the tips of the first dorsal fin and the tip of the superior lobe of the caudal fin of brilliant white color. In some specimens, the second dorsal fin may also have white tips. As we can sense from the above, Triaenodon obesus has two dorsal fins, the second one being large for what is usual in sharks, although considerably smaller than the first dorsal fin. In terms of size, Triaenodon obesus is considered a medium sized shark, with a maximum length of 1.7 meters, although there are some records of specimens up to 2.1 meters long.

Contrary to what many people might think, Triaenodon obesus is a species that is very rarely aggressive towards humans. During the day, we can find groups of specimens resting in caves or under coral reefs. If we stay at a safe but close distance from them, they will not feel threatened and by remaining unaltered they will allow us to enjoy their presence. This is one of the few species of sharks that do not have to be in continuous movement to ensure a flow of water through their gills to allow them to breathe, but their gill muscles allow water to be pumped into them without being in movement. During the night, it is a very active species, which generally hunts in groups, introducing their slender bodies through any crack in the reef. It feeds on a wide variety of reef fish, complementing its diet with molluscs and crustaceans. Triaenodon obesus is a non-territorial shark, whose specimens usually stay in not very big territories, during long periods of time.

The reproduction of the white-tip reef shark is viviparous and in each litter it can give birth to between 1 and 5 young specimens (generally 2-3). From birth until they reach sexual maturity it usually takes approximately 5 years (occurs when they reach 104-109 cm in length), and their life expectancy is estimated at 25 years. Although it is not totally contrasted, it is believed that the gestation period of Triaenodon obesus is 5 months. During the months of May to August, is when the young are born, so if we subtract the 5 months of gestation, we would obtain a period of reproduction that would pass between the months of January and March. At the moment of birth, the babies usually measure between 52 and 60 cm in length. 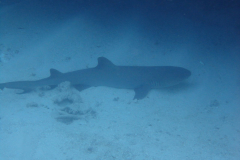 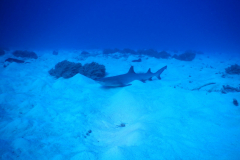 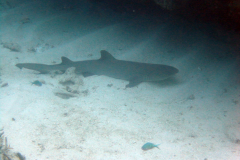 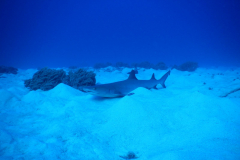 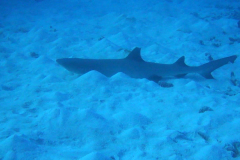