Bothus lunatus is a species belonging to the family Bothidae, which in turn is part of the order Pleuronectiformes. Specimens of this species are found along the coasts of the western Atlantic Ocean (from Florida, Bermuda and the Bahamas to Brazil) and the eastern Atlantic Ocean (Gulf of Guinea). It typically inhabits sandy flats adjacent to coral reefs and occasionally in meadows or near mangroves. Usually the waters in which we find specimens of this species are between 1 and 20 meters deep, which is the range in which they are more frequent, although it is possible to observe specimens up to 100 meters deep.

The body of Bothus lunatus, like that of all soles and related species, although it seems to be compressed dorso-ventrally, in reality the body is compressed laterally, with the right side of the body always oriented towards the seabed, and the left side upwards in this species. During the larval stage, specimens are initially pelagic and bilaterally symmetrical, that is to say with one eye on each side of the head. It is during the development of the larvae that they will undergo a metamorphosis process by which one of the eyes migrates from one side of the head to the other, so that both eyes end up on the same side of the head, which in the case of Bothus lunatus is the left.

If the strange body morphology has not caught our attention, the livery of Bothus lunatus certainly will. The upper surface of the body is a shade between gray, brown and tan, with small circular blue spots. Also both the head and fins have these blue circular spots. They can adapt the color depending on the background in which they are found, which allows them to go completely unnoticed. Not only do they use their camouflage to go unnoticed, but they also partially bury themselves in the sediment.

Bothus lunatus is an ambush predator, which remains hidden on the seabed before darting out to catch any unwary prey that approaches. Its prey includes mostly small fish, and to a lesser extent crustaceans and cephalopods.

During courtship, the male and female approach each other with their pectoral fins in a vertical position. The male places his body under the female and the pair slowly rises from the bottom. The fish release eggs and sperm as they rise from the bottom substrate. This activity is followed by a rapid return to the safety of the bottom. 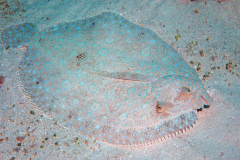