Synodus intermedius, or also known colloquially as the sand diver is a species of the family Synodontidae belonging to the order Aulopiformes. It inhabits the coastal bottoms of the western Atlantic Ocean in waters less than 35 meters deep, from the coast of North Carolina to Brazil, including the entire Caribbean Sea. We will find them mostly in or near sandy areas that make up the corridors between the reefs. Occasionally we will also be able to observe them resting on one of the corals of the reef itself, leaning on them with their pectoral fins. Although Synodus intermedius is a species that we will observe in shallow water, it can be found up to 320 meters deep.

The body of Synodus intermedius reaches a maximum length of 40 cm, although the most common is to observe specimens around 25 cm in length. They can reach a maximum weight of 1 kg. Its body is elongated and its large and wide mouth stands out from any other part of the body. It is armed with numerous small needle-shaped teeth. In the upper jaw the teeth are arranged in two rows, those in the inner row are longer than those in the outer row. In the lower jaw, the teeth are arranged in three rows, those in the outermost row are covered by the lips, and those in the middle row are the longest. The end of the lower jaw is rounded, and lacks a fleshy flap, a characteristic that differentiates it from similar species that occur in the same geographical area (Synodus poeyi). Laterally and above the mouth, we find the eyes, of which we emphasize that they have an iridescent layer that it is hypothesized that helps them in environments with a lot of illumination, limiting in this way the amount of light that their eyes capture and therefore improving their visual acuity in these environments of great amount of light. From their fins, we will highlight two things, on the one hand the rays of the dorsal fin are relatively short, on the other hand, the anal fin is formed by between 10 and 12 soft rays, a characteristic that distinguishes them from the Synodus synodus species.

The base color of the body of Synodus intermedius is pale between gray and gray-brown, with numerous spots on the head and the rest of the body. These spots, variable in shape, are black. We will also observe 8 vertical bars along the back of the specimen of reddish-brown color, as well as thin lateral lines of yellow-golden color, which run from the back of the operculum to the base of the caudal fin. As we move towards the ventral part of the specimen, we will observe that the color changes and white predominates. Synodus intermedius has a capacity to, depending on the background in which they are in each moment, modify their color by adopting darker or lighter tones, and thus go unnoticed.

They are voracious predators whose strategy to capture their prey is based on ambush. They remain half-buried in the sand or mud, or even motionless on the sea floor, and when small fish, crustaceans or molluscs pass just above them, by means of an agile and fast movement they capture them. 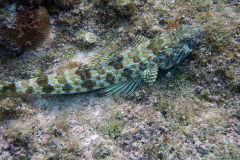