The common dolphin (Delphinus delphis) is a mammal belonging to the family Delphinidae. It is an oceanic species with a very extensive distribution, in which we can find them in most of the tropical and warm water seas and oceans of the planet. To limit its distribution, the species inhabits from the 60th parallel north to the 50th parallel south, therefore a vast extension.

The body of Delphinus delphis is moderately thin, although some coastal specimens can be a little more stubby. They have a relatively narrow snout and moderate length. Both jaws that make up the muzzle have between 40 and 61 teeth on each side, distributed in a single row of teeth. On the outside, the jaws are dark colored with a stripe in the middle of them that goes from the beginning of the jaw to the height of the eye, which it surrounds. Its dorsal fin is slightly falcate. The dorsal part of the body of Delphinus delphis is dark gray-brown, while the ventral part is white with a brownish spot on the front. This spot, at the height below the dorsal fin, begins to widen combining with light gray lines in the tail region, thus generating a very characteristic pattern of this species, which is that of an hourglass. They also have a black stripe that goes from the chin of the animal to the pectoral fins. Despite what has been described so far are the colors and patterns of the majority of the species, as a whole there is a great variability depending on the geography in which the specimens inhabit, being able to observe slight variations in the pattern of colors, different lengths of snout, ... In any case, and despite this variability, the feature that will allow us to differentiate Delphinus delphis from other dolphin species is its characteristic hourglass pattern. Adult specimens can reach 2.3 - 2.6 meters in length, and weigh close to 135 kg.

Delphinus delphis, like all dolphins, is an extremely sociable species, in which stable groups with different hierarchies among individuals are generated. On specific occasions, groups of specimens can be generated ranging from several dozen to more than 10,000. Generally, it is a very active dolphin, which likes to jump in the air and make noises.

The diet of Delphinus delphis is based on small schools of fish, as well as molluscs. Sometimes, the different members of a group use cooperative feeding techniques to corral their prey, taking turns between the corralling and feeding roles.

The breeding season for Delphinus delphis is varied depending on the geographic area in which they live, but usually occurs in the spring and fall months. At birth the young are usually around 80-85 cm in length. 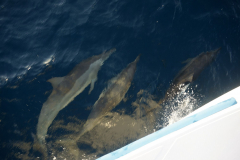 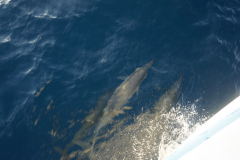