Widely known under the name of Thick-lipped grey mullet, this species receives the scientific name of Chelon labrosus. It is a species of the family Mugilidae belonging to the order Mugiliformes. It inhabits the coastal and sometimes brackish waters (they can climb rivers) of the central eastern Atlantic Ocean region, from the islands of Cape Verde, Senegal, Azores and Gibraltar, to the waters of Ireland and southern Norway. It is also present in the Black Sea and the Mediterranean Sea.

Chelon labrosus has a size between medium and long, the maximum recorded length is 60 cm. It has a wide mouth in a slightly ventral frontal position and with a slightly ascending angle. The lower jaw, in the adult specimens, has thick lips. As for the fins of Chelon labrosus, it has two dark dorsal fins, the first formed by 4 spines and the second by 9-10 soft rays. The anal fin, also dark although something less than the dorsal fins, has a structure of 3 spines (the first is very short and can be hidden under the scales) followed by 9 white rays (sometimes 8). The pectoral fins have 1 spinous radius corresponding to the most dorsal radius, which is preceded by 16 to 17 soft and long rays. The pectoral fins never reach the vertical marked by the origin of the first dorsal fin, and its color is pale with the dark dorsal margin. Adult Chelon labrosus specimens have a dark grayish-green or bluish coloring on the dorsal side of their bodies. The flanks are a silvery gray color with between 6 and 8 longitudinal lines of darker gray. The lines of the part closer to the dorsal are of a darker color than those that are closer to the ventral part. The ventral part of the body is dull white.

This species is known to be voracious eaters of virtually anything that falls into the water at marinas. The food beyond these areas, consists mainly of epiphytic algae and/or detritus particles from the surfaces of the sea floor. Juveniles feed mainly on zooplankton.

Reproduction of Chelon labrosus occurs predominantly in non-coastal waters, but preferably offshore. There, the fry remain for a short period of time, after which they migrate to more shallow and coastal waters. 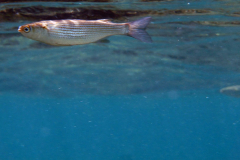