Colloquially known as the crocodile needlefish (Tylosurus crocodilus), this species can be found in practically all tropical seas. Its characteristic body with extremely elongated and slender shape, has an almost cylindrical section. The color of its body is silvery on the back and a dark blue-green tone at the top. Additionally, it may present one or several dark stripes on the gill cover, but never along its body. Juveniles have a black spot on the back of their dorsal fin, which they gradually lose as they mature.

The fine and elongated mouth of Tylosurus crocodilus is straight, and can reach a length equivalent to 1.5 times the length of the head, which places this species among the species of the needlefish family with the least long mouth. However, Tylosurus crocodilus is the species that reaches a greater total body size, reaching 150 cm in length, although the most common length is 90 cm. The mouth has very sharp conical teeth. In juvenile specimens, these teeth are positioned both in the lower and upper jaw, with a slightly forward orientation. 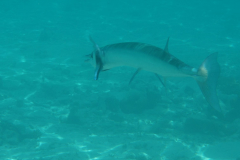 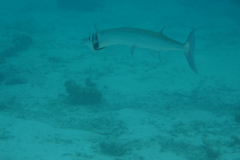 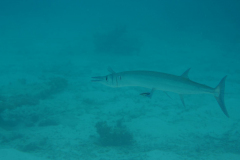