Apolemichthys trimaculatus is one of the 9 members belonging to the genus Apolemichthys, which together with 7 additional genera make up the family of angelfishes (Pomacanthidae) in which there are currently a total of 89 described species. It is a species that inhabits the outer walls of coral reefs at depths between 10 and 35 meters, in the waters of the Indian and Pacific Oceans (from the coasts of southern Africa to the east of Samoa, and from southern Japan and southern Australia).

The diet of Apolemichthys trimaculatus is based on benthic invertebrates such as sponges and tunicates, and occasionally some crustaceans caught during the day. As a general rule, this species can be observed in pairs or small groups, being the juveniles more reserved and generally solitary.

The specimens of Apolemichthys trimaculatus are protandric hermaphrodites, that is, all specimens are initially females and throughout their lives can be converted to males. It is a rather territorial species in which a male will live in its territory with a small group of between 2 and 7 females. 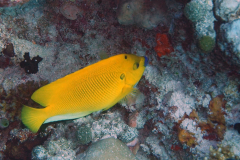