Holacanthus ciliaris is one of the 7 members belonging to the genus Holacanthus, which together with 7 additional genera make up the family of angelfishes (Pomacanthidae) in which there are currently a total of 89 described species. It is a common species in the Caribbean Sea, although its distribution in the Atlantic Ocean is wider, covering from the North American coasts, all of Central America, to Uruguay. It inhabits coral reefs and up to 70 meters deep.

The body color of Holacanthus ciliaris is bluish on the sides, with the edges of each of the scales orange-yellow. The head is orange with electric blue color around the eyes, in the area of the snout, chin and operculum. It also has on the dorsal edge behind the eyes, a large black spot that is surrounded by a blue crown. The dorsal and anal fins are the same blue-orange color but as we approach its edges the orange color is gaining strength to finally in the region closer to its edges have a thin line of light blue. The pectoral fins are yellow and have a spot at the base, and the pelvic and caudal fins are also yellow. In juveniles the body tends to darker colors, presenting 3 blue-white stripes and a dark eye band bordered by a blue line, which runs from the nape of the neck to the chest.

The diet of Holacanthus ciliaris is based on sponges, tunicates, bryozoans, as well as occasionally certain algae.

As for reproduction, the male specimens form small harems of up to 4 females with which it reproduces during the winter months and mostly during the evening. The specimens begin to be sexually active when they reach lengths of approximately 20 cm in the case of females, and slightly longer (~25 cm) in males. Clutches are very numerous, up to 75,000 eggs are released into the water column, where the male also releases sperm to fertilize them. Approximately one day after fertilization, and after being scattered by ocean currents, larvae hatch from the eggs. 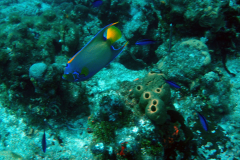